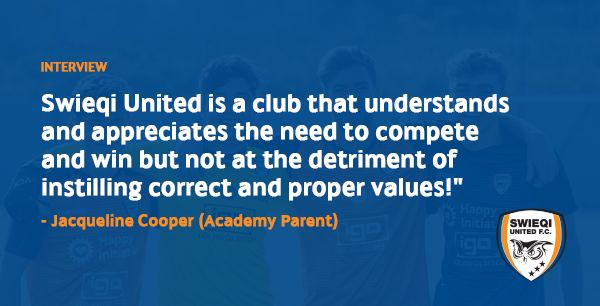 Like the majority of Academies across the island, the synergy between Staff and Parents is crucial to the well-being and long-term success of any football club. Inasmuch as children form the 'core' and 'nucleus' of any nursery, parents equally form a crucial role in any child's upbringing and development. It is within this context that the club endeavours to holistically implement its One Team One Club Philosophy - to maximise involvement of all personnel whilst generating a fun and family-oriented environment.
Academy parent Jacqueline Cooper, whose son Craig currently captains the Under 15 side more than endorsed the club's vision and philosophy - when SUFC Media decided to gather her thoughts and feelings about the club.

SUFC: Dear Jacqueline, thanks for taking the time to talk to SUFC Media! The Club's Philosophy is 'One Team One Club'. To what extent do you feel the club manages to uphold this mantra - especially at Academy level?

Jacqueline: To the best of my knowledge (and when compared to other clubs), Swieqi United provides a more inclusive and holistic feeling. This is certainly an admirable trait which will serve the club in good stead.

SUFC: As a parent, how has Swieqi United helped Craig's development both 'on and off' the pitch?

Jacqueline: Craig has greatly benefitted in learning more self-control & discipline. Moreover, he has appreciated the need for respect towards others and we have noticed an increase in his self-esteem and confidence (which incidentally were both low before he joined the club). The club has certainly been thoroughly beneficial in this respect.

SUFC: Nowadays, life is more hectic and kids are expected to cope with all sorts of pressure at an early age.  In many cases, some parents decide to completely axe sports from their kids' lives in order to concentrate on studies. Do you think this can have a detrimental effect on any minor's well-being?

Jacqueline: Football can certainly have a positive effect on every child's well-being. Excluding sports or physical activities in my opinion is undoubtedly detrimental as today's society encourages too much individual screen time and virtual personal relationships leading to a reduction of physical activity and interpersonal skills - skills that can be fostered and nurtured within a learning environment - such as the one that Swieqi United promotes.

SUFC: Even though the Swieqi Academy is in its infancy (having been formed in 2013), can you tell us, what in your opinion, are the Academy's greatest achievements/traits?

Jacqueline: Certainly! The fact that it’s a friendly club which shows that you can be both ambitious and successful, whilst maintaining the highest standards and principles of behaviour!

SUFC: And finally, what would be your message to prospective parents who are still pondering whether or not to enroll their son/daughter with Swieqi United?

Jacqueline: My message to all prospective parents who are looking for a club environment which is inclusive, which is positive in its encouragement of individuals, and which fosters personal achievement is to choose Swieqi United. Moreover, this is a club that understands and appreciates the need to compete and win but not at the detriment of instilling correct and proper values!
Everyone involved with Swieqi United wishes both Craig and his parents all the very best!
< Back to News