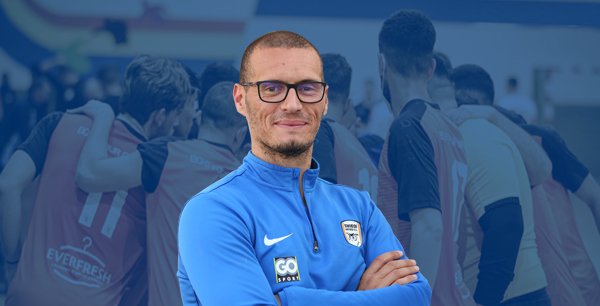 'At Swieqi we have developed our own style and identity which have certainly led us to becoming stronger & tougher....'
(An exclusive interview with Futsal Coach Dylan Micallef).
Swieqi United's Futsal team is more than punching above its weight. It is playing a brand of futsal that is genuinely aesthetically pleasing. However, beneath the veneer of fine one-touch passing and neat footwork, lies hard work, intense match preparation and a never-say-die attitude.

Prodigious performances have been complemented by great camaraderie & impeccable new signings - ensuring that the club's futsal department remains as strong as ever. One man stands at the forefront of this recent 'renaissance' - a man who manages to juggle his novel coaching career with committee (not to mention work!) commitments. Seeking to delve into the inner 'sanctum' of our Futsal team, SUFC Media decided to meet up with Seniors Coach Dylan Micallef to conduct a very interesting interview.

SUFC: Dear Dylan, thank you for taking the time to speak to SUFC Media! The team has started very strongly this year - what in your opinion are the main reasons for this very good run of form?

Dylan: I can give you plenty! A good run is usually a result of a number of factors and ingredients. The nurturing of home grown talent is one of them. The introduction of new talent that fit into the club philosophy is another. Continuously motivating the leaders of the group is also another challenge which we've managed to overcome whilst eliminating any dissonance within the group.

However, one important facet is the ability to attract experienced players (both local and foreign). All this means nothing if there isn’t the right chemistry within the unit and players who adopt the right mental attitude. For these reasons, Swieqi Futsal has become consistent, we have developed our style and our identity which have certainly led us to becoming stronger & tougher and we are now capable of competing across all positions on the pitch whilst playing with great temerity.

SUFC: This year also sees a complementary team being set up in the league - Ibrag Futsal. Can you tell us a little bit about the synergy between the two sides?

Dylan: Ibrag is a bi-product of Swieqi U19s. Together with Timmy Gingell, we have a very tight-ship relationship. I don’t think we would have achieved half the stuff we planned to achieve without his involvement & management. We talk regularly on players and how to improve the program. At one point it was getting disheartening due to the mixed messages & inveterate disorganisation from the FMA but this issue is now water under the bridge. Our hope is that from this new administration we can get a clearer picture and eventually obtain the adequate support to ensure this project becomes a success. A project which everyone can adopt and build. We are always available to help because this is how we will grow Futsal on the island and keep on introducing fresh talent.

SUFC:  You’ve played Futsal for quite a long time - how have you adapted to the transition from playing to coaching?

Dylan: To be fair it was easier than I thought. At some point you start realising your body isn’t going to give you the support to sustain yourself at a certain level of play. With Futsal and its intensity this can hit you like a ton of bricks. Considering that I was also the team manager of the past teams of Swieqi, jumping on the hot seat was easy as I knew the players. I was also lucky to train with foreign coaches who brought their Futsal culture and experiences to Malta. They successfully imparted their knowledge onto me and I took a leaf out of their book. I gathered my thoughts & ideas, complemented them with the methods I thought would work best for the team and kicked-off a new project. The license and the course I took from Spain helped me a great deal and I 'armed myself' to ensure I was fully prepared to take on this new role at the beginning of the season.

SUFC: Who is your role model in the world of Futsal?

Dylan: Rather than a role-model, I look up to any of the players than have hunger, determination and fight and put all that tenacity in the game. That is why I always enjoyed watching Miguelin from Elpozo Murcia. He is certainly an inspiration and someone I admire.

SUFC: And finally what are your hopes and aspirations for both the season and the coming future?

Dylan: For this season, my hope is that most players remain injury-free because the less injuries we have the aspiration of serious silverware becomes more realistic. For the future, to keep building the nascent Swieqi futsal program from the academy upwards and no doubt to maybe one day be able to experience a Champions League game as a Manager of the squad.

Everyone at Swieqi United wishes Dylan Micallef & the boys all the very best. Moreover, we would like to thank all the staff & volunteers that work day-in day-out to ensure this project is a success!
< Back to News