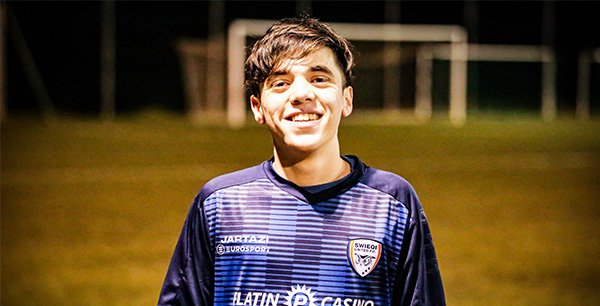 Jack Law epitomises everything that is great about the Swieqi United. He has been at the club for quite some time and has slowly built himself up, guided by the club's highly skilled coaches and professional set up. Having blossomed with the Under 17s, Jack was recently promoted to the Under 19 squad where his performances have been impressive - and his work rate inestimable. With this in mind, SUFC Media sought to meet up with Jack who afforded our media team some time from his very hectic schedule!

SUFC: Thanks for taking the time to speak to SUFC Media Jack! First thing's first, how would you assess the season so far? Both from a personal and club perspective?

Jack: We are top of the U17 League (Section C) as things stand,  so the season so far speaks for itself but we need to stay grounded as a team and take it game by game. We have played some great football and also showed great character to hold on for a large portion of the game with a man less against Pembroke Athleta in particular. Our aim is to win the section of course and we have the quality to do so but we have to remain grounded all the time!

SUFC: You are still young and yet you're making quite a name for yourself...what's the dream?

Jack: Am I making a name for myself? That’s nice to hear!  The dream is to play abroad one day of course but I would like to play for the senior team of Swieqi United first (hopefully) in the Premier Division, which I am sure we will be there soon - considering the club's progress & professionalism.

SUFC: You're able to juggle playing for both the Under 19s and Under 17s...can you walk us through your weekly routine...and how much of an impact is this having on your career?

Jack:  I am enjoying playing for both the Minors (U19s)  and U17s. It is tough to do both but I love every minute of it. Any minutes I get with the minors are a bonus for me and it enhances my development as a player which is important. It is all about gaining experience and I always try to give my 100 % whenever I put on the famous Orange kit. My routine is definitely busier, now that I have started training with the minors as from training four times a week I now train five times a week and have two games a week.

SUFC: Who is your role model in football?

Jack: I have two role models. The obvious one being both Messi and Cristiano Rolando - which is an answer you will probably get from everyone at the moment. However, my local inspiration I would say rather than a role model would be Matthew Guillaumier. I know he kept his head down and just worked to be the best he could be and now he is a regular starter for both Hamrun Spartans and the Malta National Team. He is proof that if you put the work in, it’s possible . So I would say he would be someone to look up to perhaps.

SUFC: And finally, 'Why Swieqi?'

Jack: I joined Swieqi United because Jon (Briscoe White) first  joined Swieqi (back in 2014) and was the captain of the club when they were in the Second Division for a few years. I was eleven years old at the time so I didn’t have much say in the matter - but I never regretted it. However, Swieqi is one of the few clubs in Malta that is very well run with a professional mindset. They believe in their youths and their homegrown players and it really is a 'one team one club' mentality.  I also appreciate the fact that they prepare you for senior team football. From the Under 15s upwards,  the tactics & formations are very similar and it prepares you well for when you're thrown into the 'deep end'.

Everyone at Swieqi United would like to take this opportunity to wish Jack Law and the team all the very best for the remainder of the season!