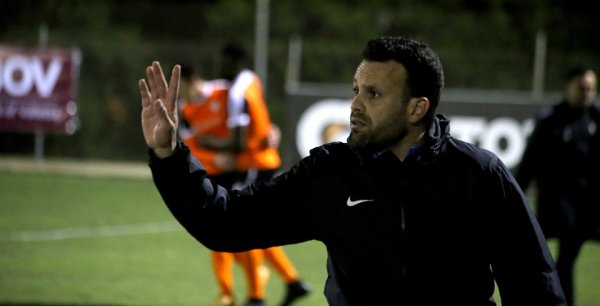 08.07.20 An environment in which the player can grow and develop

Rodney Bugeja has been at Swieqi United FC since 2015, and is now heading into his sixth season at the club, and his third as the Head Coach for the Men’s Senior squad.  The club’s media team reached out to Rodney to catch up with him about the club’s past successes and see his aims and aspirations for the new season.

SUFC: Hi Rod. You joined Swieqi back in 2015, when our youth team was competing in Section D (of the U19 league).  That season we ended in third place, just missing out promotion.  One year later, you successfully led the club to the Section D championship.  What memories do you recall from your first two seasons?

RB: The whole journey with Swieqi United has been an amazing rollercoaster ride. I have loved every minute of it. The first two seasons were where we started forming the team (coaches and players) in line with our values – hard work, commitment, but most importantly teamwork and respecting one other.

When I joined Swieqi there already was a great core of youngsters who were hungry and enthusiastic to play football. Most of these players were shunned by their previous club/s. They were all good players but all they needed was some attention and someone to believe in them.

My first memory with the Club is our first training session in July, in the summer heat, at Melita Grounds. Since I was new, and it was already a bit late in pre-season, we decided to set up an intra-friendly. I was immediately impressed with the quality but more importantly the attitude of the players.

We started the season slowly with two points from the first nine, but I always believed that the group would pick up momentum and good results - and we did.  It was an amazing group; the players were more than just teammates – they were good friends who would jump into a fire for each other.

The next season we strengthened the squad with players who were on the verge on Senior team football, and after suffering a heavy loss in our first game, we went on a great run of only one loss in the next 17 games to win the league. My fondest memory of that season was beating Hamrun in the Trophy. No one had given us a chance, and after a shaky start, we dominated the game, winning 2-0. It was an amazing atmosphere before, during and after the game. It gave the whole squad the confidence to push on for both Seniors and Minors games.

SUFC: In that same season, we had over 20 minor players feature in various games with our Senior Squad.  This has been an important trend for the Club, who have always fielded minor players in senior games, throughout the last few years (with the average age of the squad always less than 25 years old).  How important is this for a young club like Swieqi United?

RB: We feel that it is important that young players get a chance to perform at the highest levels. In my five years here, we have always pushed youngsters to improve, showing that we believe in them and we are ready to give them a chance, as long as they are committed and put in the work.

We have players in our squad who have been with us for three to five years, with some even playing in Section D with our minors.  Obviously, it is not only about playing young players, but also putting in the desired performances and getting good results. We have shown that if you give youngsters hope and that you believe in them, they will repay you with commitment and loyalty on the pitch.

SUFC: Your third season at the Club was by far the Club’s best ever season.  How challenging was it for you to be coaching the U19 squad and challenging to win Section C, while also occupying the role of assistant coach of the Senior Squad, who were also challenging to win promotion from the Second Division to the First Division?

RB: Our third season was a brilliant one. We had a very young Senior Squad; more than half of it were minors. We had invested in some up and coming youngsters who were looking to make the step up into senior football.

I have so many great memories of it, which climaxed with the final U19 league match against Msida and the Seniors’ playoff against Zabbar. In reality, it was the players’ will and never say die attitude that made the season so successful.  I have never seen such a group as united and devoted to the cause. Everyone doubted us and no one expected us to continue winning, but with sheer determination and belief in one another we had a great season on both fronts.

It was a very demanding season, as you said, because we were challenging on two fronts. Every game was like a final and was psychologically draining. Saying this, I would not have changed anything from that season.

SUFC: Following three seasons coaching our U19 squad, getting promoted from Section D to Section B in consecutive seasons, you replaced Coach Billy to lead the Senior Squad in the Club’s first ever season in First Division.  What difference was there from coaching at Minors level to coaching the Senior Squad?

RB: In reality, there isn’t much of a difference in ‘coaching’ minors to our seniors. I had been the Assistant coach for the past three seasons, so I knew the players well. The difference was that now, the responsibility was mine. The pressure is obviously higher, and we were playing in the First Division for the first time in the Club’s short history.

I decided to keep most of the squad that took us up. Although most of the players had very little to no experience in this division, I believed they deserved the chance to prove themselves on this platform. They did not let me down, and we had a memorable season, where we showed fight and played some good football along the way to preserve our First Division status.

SUFC: Against all odds, in the 2018-19 season, the Club managed to successfully retain its status in First Division with a few games to go.  What was your best memory throughout the whole year?

RB: You say against all odds, but I always had faith in this group. We have a family atmosphere here at Swieqi United, and this goes a long way in producing strong performances. My best memory was in our first game - no one gave us a chance, and we beat San Gwann 3-1 (who had finished 5th in the league the season before). The emotions and togetherness in these photos show it all!

SUFC: Last season was one that will go down for the wrong reasons, as the league ended prematurely due to COVID-19.  The Club got to an historical last 16 stage in the FA Trophy, being eliminated against Premier League side Hamrun Spartans.  What were your thoughts of the season?

RB: It was a mixed season. We had some great performances and results, where we showed our character and what we are capable of when we are on our game, but there were performances which showed our inexperience.

We did well to reach the last 16, beating Mellieha in the second round and Qormi on penalties (in the third round). The game against Hamrun was a good showpiece for our young players. Although Hamrun dominated the game, we played well, defending well and creating some good chances on the counter. We pushed them to the end, even scoring to make it 2-1, giving them a bit of a scare.

Due to the season ending prematurely, I cannot really assess the whole season, as we had seven more games to play. As usual, it was a very difficult and balanced league. We were the best that we could have been, and we were competitive in every game. We will be looking to improve next season.

SUFC: You have recently been confirmed as the head coach for another season.  Besides being the Senior Men’s coach, your role entails you to oversee the U19 squad too.   What thoughts and aspirations do you have for the next season?

RB: As always, we want to keep improving and the only way to do that is to continue working smartly and hard. The aim for next season is to continue to develop our players, helping them grow in an environment where they feel safe to express themselves, always pushing themselves to improve.

We will continue to try to attract hungry young players, players willing to fit in with our culture and continue to push them to reach their goals.

Our aim is to win every match, whilst enjoying the game we love.

SUFC: Finally, besides your role at the Club, you are currently preparing for your UEFA Pro Licence.  Considering we have many young coaches at the club, what message can you pass on to them?

RB: Many coaches think that the most important thing about coaching is the tactics, but I think it’s important to take care of the people first - your colleagues, and, most importantly, your players. Show them you care, show them that you believe in them – once they realise this, they will follow you anywhere.  As Theodore Roosevelt said: “People don’t care how much you know, until they know how much you care.”