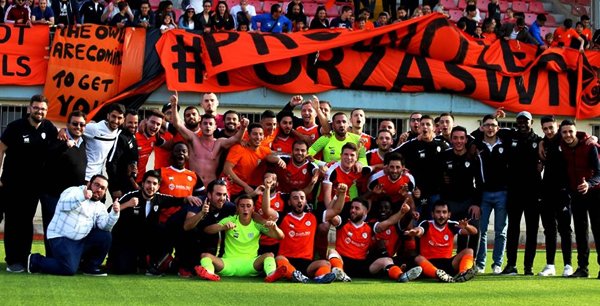 Swieqi United's charge towards its eventual promotion to the BOV First Division was by no means for the faint hearted. Indeed, the run-in had everything: several heartbreaking moments, various ups and downs, sendings-off, and missed chances down to levels of despondency never experienced within the club. However, the 2017/18 season will go down in history as the Club's most successful campaign to date.

Despite leading the standings throughout the majority of the season, Swieqi's young squad, coupled with sufficient lack of experience at the top level, made for a frantic last few games. In any event, by March 2018, the Orange had managed to record a comprehensive 4-1 victory against Birzebbuga.  However, one week later, that culminated in a harrowing experience against a relegation threatened St. George's FC, where the Orange lost through a last gasp goal at the Luxol Stadium  The defeat was followed by a comprehensive 6-1 thrashing of Kalkara FC, in a 'complete' performance which saw different goalscorers get in on the act.

This win eventually led to two games against potential title challengers.  The first was a game against Fgura United played at the Centenary Stadium - in a dramatic game that included a sending-off, missed penalties and a fantastic goal scored by Nicholas Schembri, at the end of it all, the teams could not be separated, the match finishing 2-2 after a pulsating encounter.  Subsequent to this came another crunch game against Gudja United - who at that point in time were a major contender to win the title themselves. Despite the fact that the game ended in a goalless draw, it was full of tension, missed opportunities and a very tight tactical display from both sides.

Going into the final day of the season, Gudja United were top of the league on 46 points, Santa Lucia were on 45 and Swieqi United on 44.  Any one of the three teams could potentially win the title if all results went their way.

Swieqi United's final league showdown was a tricky game against Marsaxlokk FC at the Sirens Stadium. Despite being slight favorites to win the game, the Owls unfortunately conceded three goals within the first half. Despite getting one back, there was to be no consolation whatsoever as the Orange recorded a painful defeat to end the season in 3rd place and placed in a promotion/relegation playoff against Zabbar St. Patrick FC - the team that finished third from bottom in the First Division. Ironically, had the Orange won the match, they would have been crowned champions with 47 points, as Gudja lost their game to Fgura United and Santa Lucia drew 0-0 with Siggiewi.

The odds were against the Orange, as in a playoff scenario, no team from an inferior division had ever beaten a team from a superior division in Maltese football history.  Despite some trepidation from both the fans and the players, the Owls managed to run out comprehensive 3-0 winners on the day - with goals scored by Nicholas Schembri (2) and Luke Scicluna - sending the Swieqi supporters into ruptures and delirium. Victory had been achieved. The impossible suddenly became possible, as the Orange won promotion to the Maltese 1st Division.

2017/18 was an exhausting season. Despite plenty of titanic clashes, Swieqi United managed to reach their objective - that of finally conquering the Second Division and a place amongst some of the most established teams on the island. Notwithstanding the fact that the Orange certainly made life hard for themselves, their overall quality was never in doubt as their style of play reflected months of hard work, tactical nous and a physicality which could not be matched by many teams. Long may this campaign and victory be cherished by all lovers of free-flowing & attacking football!