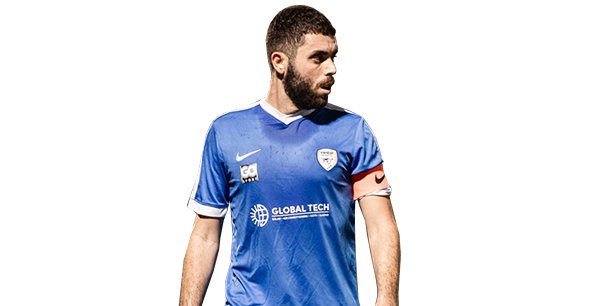 Roderick Taliana is the Men's Senior Team captain, one of the club's most experienced players, and an all round nice guy.  Swieqi United's Media Team sat down with Taliana to discuss his journey with the club, as well as the struggles he endured in overcoming a serious injury just under two years ago.

SUFC: Roderick, thank you for accepting this interview with us.  So, who is Roderick Taliana?

RT: I am 26 years old and I am a PE teacher. My favourite foreign football club is Juventus. I love training and keeping myself fit at all times.  Apart from football and training, my hobbies are fishing and drawing.

SUFC: You joined the club from Lija Athletic in 2016.  Why did you choose Swieqi United?

RT: Joining Swieqi was the best decision I made in my football career to date. I never thought this was going to be such a great experience in my life.

I grew up playing for Birkirkara FC, playing with them for 15 years, made my Premier league debut with them and had the opportunity to play with the best players in Malta. I won the Section A U19 league with Birkirkara FC, the first time the club had managed to achieve this feat. We were united and felt like a family that year, coached by Peter Pullicino and Alan Muscat as kit manager and George Sammut as team manager.

My two year journey with Lija Athletic consisted of playing thirty games in the 1st Division and managing to win the U19 Section D league as one of the overage players.

Prior to then, I had never heard of Swieqi United.  As one of my best friends (Dylan Gouder) went on trial with them, I decided to also go for a trial, and, as they say, the rest is history! I must admit that at first I didn’t want to play in the 2nd Division, but I believed that I would eventually benefit from the decision, and I believed in the club and its project.

SUFC: Over the past seasons, you have always worn the number 23 shirt.  Any reason?

RT: I like the number 23 because Arturo Vidal, my favourite football player, used to play with this number during his Juventus days.

SUFC: Being at the club for four seasons, what has been your greatest experience so far?

My greatest experience with the club is when we got promoted to the 1st Division. It’s an experience that I will cherish for the rest of my life. I had the opportunity to win promotion in my first year as captain of a senior team. I would like to thank all my brothers and coaches especially Billy Mock, Rodney Bugeja and Roger Walker, physiotherapists, especially Josef (Pace), and the club’s technical staff, especially Daniel Mifsud, Mark Zammit, Michael Calleja and President Justin Fenech for their support during this unforgettable year!

That same year I was nominated for the best player award of the 2nd Division too, and that was also something unforgettable, and something that I would not have been able to achieve without my teammates and the club's support.

SUFC: Having said that, last year was a tough one for you personally. How much has it developed you? What have you learnt from it?

RT: I believe that people develop strength through past experiences, especially negative and painful ones. One of the most negative experiences in my career was getting injured while playing during one of the best seasons of my career, towards the end of the 2017/18 season, when we were competing for the title in the 2nd Division.  I broke my patella in a decisive match against Gudja United and played till half time. As they always do, my brothers on the pitch played their hearts out, getting a draw against a strong Gudja side.  Eventually, I managed to play in the playoff match against Zabbar and following an outstanding team performance we managed to win and get promoted to the 1st Division!

I was operated on my knee after the season and was sidelined for a whole season - 504 days to be exact.  504 days of hard work, pain, and determination.  Sometimes, yes, I felt like giving up.  Being physically strong is always important in every sport, but requiring mental strength is something else.  Mental strength can help you achieve anything you want.  As the healing process was slow, and I wanted to play football no matter what, I had to make sure that I was determined enough to have the patience to fully recover, something which I eventually did, in part thanks to the incredible support system that I had around me.

In my opinion, everything happens for a reason.  You must understand what that reason is.  As a result of my injury, I motivated myself more and came back onto the pitch as a better player and, more importantly, as a better person. I now look at things differently and one of the things I learned is that you need be calm, patient, determined, and motivated, and must trust the process!

SUFC: Which was the most important goal you scored for the club?

RT: Definitely the equalising goal against Siggiewi FC in the 96th minute.  We kept our place as league leaders, and it was the perfect end to a hard-fought match. I still remember Gaffa laying off the ball and I shot the ball into the bottom right corner from outside the box.  It still gives me shivers to this day!

SUFC: How much responsibility do you feel you have, being the Men’s Senior Team captain, especially considering you are one of the most experienced players in a very young team?

RT: Being captain of a senior team is something that I am proud of.  My mentality as captain is that I love to lead by example.  Sometimes I do feel a bit of pressure, but I play with a team of gentleman who are my strength and help me in being the best person I can be.  All I can say is that as captain, I am proud of all these young men and their football careers.