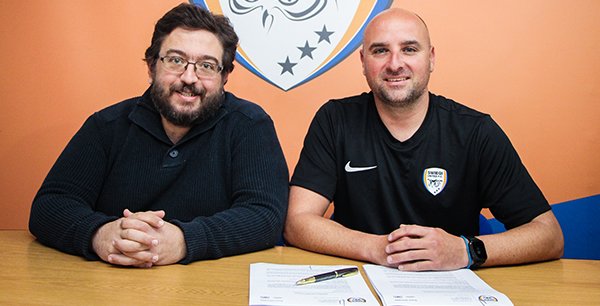 Swieqi United FC is delighted to announce the immediate signing of UEFA 'A' Elite coach Marko Glumac, who joins the Club on a three-year contract. Glumac shall be assuming the role of Assistant Technical Director and Academy Head Coach within the Club.

Glumac brings with him a wealth of experience into his new role, having occupied various coaching roles over the past years, in particular stints Santa Lucia FC, Luxol St. Andrew's FC and Melita FC, among others.

Glumac's addition to the Club structure ensures that he will strengthen an already strong and growing Academy.

"On behalf of everyone at the Club, I would like to welcome coach Marko Glumac to Swieqi United FC," said Club President Dr Justin Fenech. "Marko is a fine addition to a Club that is always seeking to raise the bar. The Club is embarking on the next stages of its 2020-25 strategic plan, and Marko will play an important role in aiding us achieve our goals."

In comments given to the Club, Technical Director Billy Mock said that he "look[s] forward in collaborating with Marko – together we will be building on past successes in order to guarantee a stronger future for the Club." Mock and Glumac shall be working hand in hand in order further develop the Club’s technical philosophy and training methodology.

In his first comments to the Club, coach Glumac said the following, "Following a detailed conversation with the President and Technical Director I concluded that we share common value, a similar philosophy and a love for football. I therefore decided that joining Swieqi United FC should be my new football challenge."

Asked about how he perceived the academy, he continued, "Swieqi United FC is a modern club that is growing in all categories. The Club is open for further development and we will be working on improving our technical and organisational setup so that we may reach higher levels in the coming seasons."

"I would like to take the opportunity to thank Swieqi United FC for their trust and the warm welcome into their family."