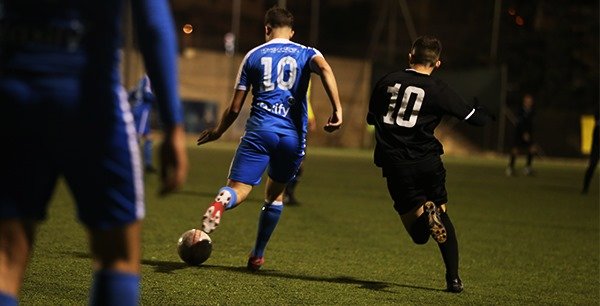 It was a difficult day at the office for Swieqi United in the latest Youth League Section B fixture, as Santa Lucia avenged their loss to the Orange in the first round with a comprehensive 3-1 victory.

The teams started off the match quite evenly, with the midfield battle dominating the passage of play. As the first half progressed, however, Santa Lucia became more dangerous and started seeing more of the ball in the final third. A foul by goalkeeper Wayne Baldacchino then presented the Blacks with a good opportunity, and Diego Segura made no mistake from the resultant freekick to deservedly open the scoring for the southerners. Omar Elouni then quickly doubled their lead with a smart finish off the far post. To compound the situation further, the Orange then lost captain Luke Gatt to a serious looking injury just before half time. We wish him the best of luck in his recovery and hope to see him back on the pitch in the near future.

Although the events towards the end of the first half deflated the Orange, they nonetheless came out of the changing room bouyed to give an improved performance in the second half. This resulted in a higher line being played by the Owls, with Santa Lucia unable to spring the offside trap. Nonetheless, slightly against the run of play, Segura scored his second of the match in the 57th minute, as Baldacchino could only palm the ball into the back of the net following his powerful shot.

As the match drew to a close, the Owls pushed forward in search of a consolation goal, which they managed in the 77th minute, after an Isaac Micallef shot from distance took the ball past former Swieqi United goalkeeper Yandrick Cassar.

The team's next match is against Qormi next Tuesday, once again at the Sirens Stadium.