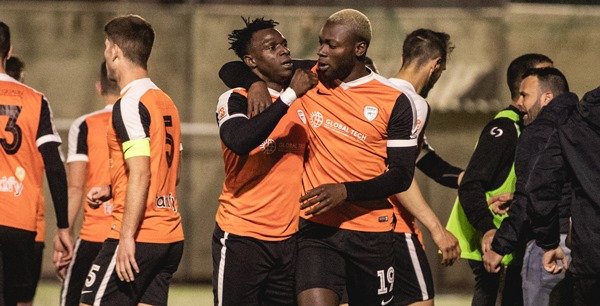 An 86th minute header from Ibrahim Salis rescued a point in a tense derby game against rivals St. Andrew's, extending the Owls' unbeaten streak to four matches in the process.

In a match of precious few chances, St. Andrew's started off the better of the two teams and were often seen trying to force the issue, in particular during the first half. However, despite getting into promising positions many a time, their final product let them down and they never really came close to threatening goalkeeper Craig Abdilla. The Orange, on the other hand, in part buoyed by recent results and displays, were happy to absorb the pressure and try to hit their opponents on the break.

Some tactical tweaks by coach Rodney Bugeja in the second half saw the Owls be more assertive in midfield. Ironically, however, they fell behind to a Mattia Veselji goal from a counter attack in the 70th minute, after their most positive passage of play.

After the goal, Bugeja brought on Tejumola Ayorinde in order to add more presence in attack, and indeed, the final 10 minutes of the game were all Swieqi United. With four minutes to go, a set play on the right hand side of the pitch floated that was into the box eventually found itself onto the head of Salis, who calmly headed the ball past the opposition goalkeeper to equalise proceedings.

St. Andrew's then threw the kitchen sink at the Orange in an attempt to take the three points, but it was not to be, as resolute defending from the Owls ensured a critical and historic first ever league point against the team's regional rivals!

The team's next match is against Qormi FC next Thursday at the Victor Tedesco Stadium.