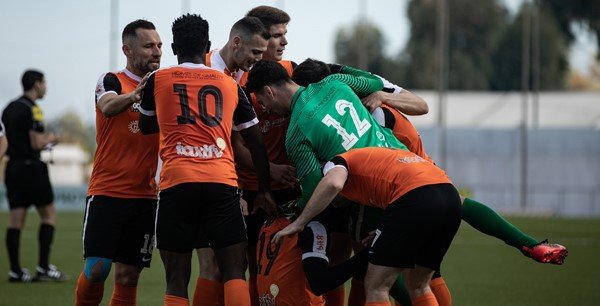 A determined and dogged Swieqi United performance saw off the challenge of Naxxar Lions in the team's latest match in the First Division, with the Orange running out 3-2 winners.

Barely seconds into the match, the Owls were awarded a penalty and Naxxar were down to ten men, after Benjamin Essel was shown a straight red card. Alan Schembri Wismayer coolly dispatched the penalty to give the Orange the lead. Naxxar then tried to apply pressure on the Swieqi United defence, but were constantly susceptible to the counter attack, finding themselves short at the back due to the man's disadvantage they had. This tactic worked against them in the final minute of the first half, as a rapid counter attacking move involving new recruit Chris Matombo saw Tejumola Ayorinde expertly finish off the inside of the post.

In the second half, the Owls were happy to let Naxxar gain possession of the ball, knowing fully well that the match was their's to control. However, the Lions found their way back into the match in the 73rd minute, after a speculative shot by Gilberto Martins clipped the underside of the crossbar and bounced over the line, thereby reducing the arrears between the teams. Nonetheless, Felipe Fernandes restored Swieqi's two goal lead within seconds of coming on the pitch, scoring with his first touch, as his deft finish left opposition goalkeeper Omar Borg with no chance. Naxxar were then awarded a soft penalty eight minutes from time, which was duly converted, to set up a tense finale, but the Owls managed to see out the match and take home an important three points in the process.

The team's next match will be against Zebbug Rangers this coming Friday.