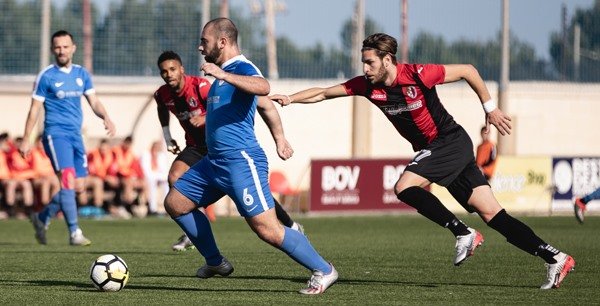 While Swieqi United were clearly the underdogs going into this match, the team's fourth round FA Trophy clash against Hamrun Spartans proved to be a closer affair than most anticipated, with the Premier League side running out 3-1 victors, to book their place in the Quarter Finals of the competition.

Hamrun stormed out of the blocks and won a penalty within five minutes, but the resultant spot kick was excellently saved by goalkeeper Edward Gatt. This only proved to be a temporary reprieve though, as after 15 minutes, an expertly placed header from Karl Micallef opened the scoring for the Spartans. As anticipated, Hamrun then had more of the ball throughout the first half, but the Owls' defence stood resolute throughout, repelling each Hamrun attack that came their way.

The second half saw a more open match, with Gatt again making some crucial saves to keep the Orange in the contest. Felipe Fernandes came close to equalising, but his shot hit the side netting. However, midway through the half, Gatt was once again beaten by another Micallef header.

Former Swieqi United goalkeeper Jean Claude Debattista then came on for the final 15 minutes of the game, and his first task was to pick the ball out of the net, after a fine Roderick Taliana shot from the edge of the box found its way past him. This set up a tense finale between the sides, with the Owls trying to search for an equaliser to take the game to extra time. Alas, it was not meant to be, as in injury time, a swift Hamrun counter attack saw Nicola Leone seal the tie for the Spartans.

In spite of the result, the Orange can be mightily proud of their efforts in this season's competition, and bowed out with their heads held high!