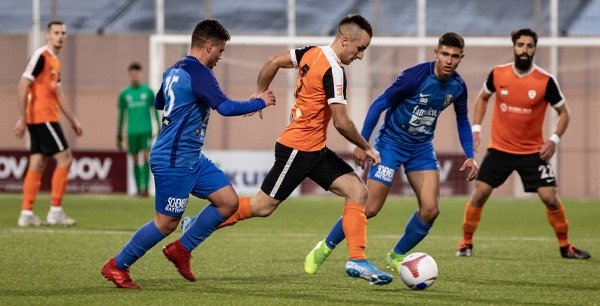 Swieqi United's final match of the first round of the BOV First Division took place yesterday, with the Orange pickiung up an important point in an entertaining draw against mid-table Pieta` Hotspurs, in what was the teams' first ever encounter against each other. The game also marked Kristian Sultana's 100th appearance with the club.

The Owls saw most of the ball and had some good chances in the first half, with Alan Schembri Wismayer in particular proving to be dangerous down the right flank. Pieta`, to their credit, were dangerous on the counter attack too, and forced goalkeeper Craig Abdilla into a couple of important saves. However, on the stroke of half time, Ibrahim Salis powerfully headed in a peach of a Josuael Azzopardi cross at the far post to give the Owls the lead going into the break.

After the interval, Pieta` pressed the United defence in search of an equaliser, often pinning the Orange's midfield just after the half way line. Their persistence paid off as in the 71st minute, the Hotspurs were awarded a penalty, which was duly dispatched by Caetano Ze Lucas. Little action ensued subsequent to the goal, however, with the Orange trying to press on in search of a winner to no avail. Ultimately, a draw between the sides was a fair result to a balanced encounter.

The Owls will next face Hamrun Spartans in the FA Trophy this coming weekend.