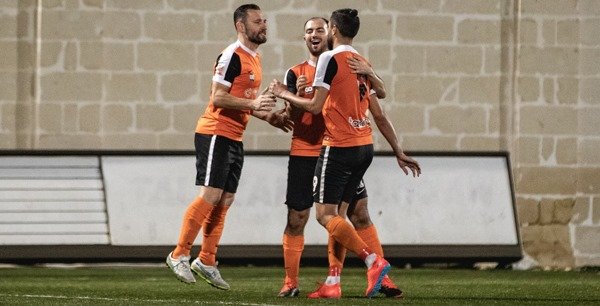 Swieqi United put in a dominant performance on the pitch in the team's latest league match, beating St. George's 4-0 and earning an important three points in the process.

In the initial stages of the match, both teams looked to play the ball through the middle, resulting in some great passages of play. Nonetheless, there was an element of good fortune in the Orange's first goal, as Roderick Taliana's shot was only parried by the opposition goalkeeper into the path of Ibrahim Salis, who followed up expertly to put the Owls in the lead.

Minutes later, Salis was fouled in the box and a penalty was given - but unfortunately, Felipe Fernandes' shot was well parried by Julian Azzopardi. This gave St. George's the necessary momentum in search of an equaliser, but the United defence was up to the task, keeping the opposition attack at bay throughout.

At the beginning of the second half, St. George's initially continued in the same vein, trying to find an equalising goal but to no avail. After an hour though, Swieqi United were awarded another penalty, after a St. George's player handled the ball on the line, with the said player being sent off as a result. Taliana's penalty, however, was once again parried by Azzopardi.

The sending off and subsequent introduction of the pacy Tejumola Ayorinde left St. George's exposed at the back, with the Orange going close on numerous occasions. Felipe Fernandes took advantage of the opposition's numerical disadvantage with a well worked goal in the 66th minute, before a Taliana strike and a great individual goal from Fernandes - both in injury time - emphatically sealed the deal for the Orange.

The team will now play Fgura United in their next match.