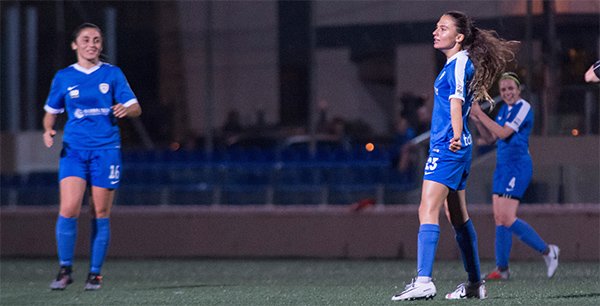 Swieqi United’s Women's squad earned themselves a well-merited three points against Mgarr United, putting in an exceptional performance against the Greens, with a disciplined approach and unwavering grit proving too much for their opponents on the day.

The ladies in Orange blazed out of the box at the sound of the whistle, putting pressure on the Mgarr goalkeeper. In the 10th minute, the Owls opened the scoring, when Demi Gauci Maistre’s shot surprised the opposition goalkeeper, who could only parry it into her own goal. While Swieqi United continued to dominate with possession and put incessant pressure on their opponents, they missed a few good opportunities that could have secured their lead in the match early on.

At the start of the second half, the atmosphere in the ground was tense as both teams fought relentlessly to create goal scoring opportunities. In the 60th minute, and slightly against the run of play, Demi Gauci Maistre's shot went straight into the net after the goalkeeper let the ball slide through her fingers. From that moment on, the Greens were relentless and continued to pressure Swieqi United’s defence until the end, but the Orange backline and in particular Vesna Vitanova’s heroics in goal denied Mgarr any opportunity for celebration.

Spectators were treated to a thrilling, high quality affair between both teams which eventually saw the Orange leaving the pitch with three points and the team's first ever win against Mgarr in the bag.