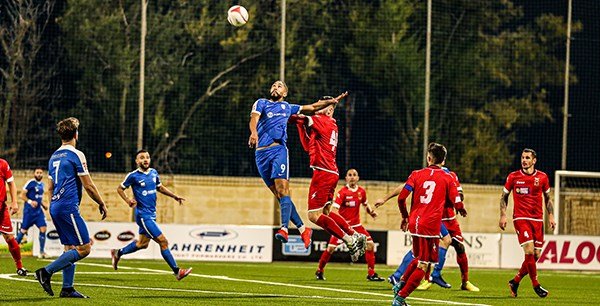 In a tight game played in tricky conditions at the Centenary Stadium, Swieqi United unfortunately failed to capitalise on a number of good opportunities in a narrow 2-1 loss to Vittoriosa Stars.

The Orange started off the game brightly and looked to attack the Stars' defensive unit from the off, drawing a few good saves from their goalkeeper Martin Moyano. However, slightly against the run of play, Vittoriosa took the lead, when a throw in from the by line eventually found an unmarked Ousmane Sidibe, who expertly smacked the ball past the hapless Edward Gatt.

Even though Vittoriosa were bouyed by the goal and looked to further capitalise, the Owls' responded seven minutes later. Felipe Fernandes won the ball in midfield and eventually it fell for Alan Schembri Wismayer, who passed to Ibrahim Salis. Salis then expertly turned in the box and hit the ball into the bottom corner of the net.

As soon as the second half began, play was suspended due to torrential rain; and when it resumed 15 minutes later, the match continued in a similar fashion, with both sides having good opportunities but failing to capitalise accordingly. That was until two minutes from time, when a Vittoriosa corner found an unmarked Sidibe, who scored his second of the match to give the Stars an important three points.