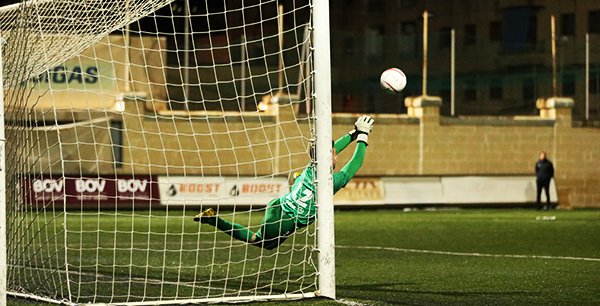 Swieqi United managed to pull-off a major upset when they defeated the 2013 FA Trophy finalists Qormi FC 5-4 on penalties, after an entertaining 2-2 draw during regular time. The Orange therefore progress to the fourth round of the FA trophy for the first time in their history.

The Orange got off to the perfect start when two early goals by Tejumola Ayorinde steered the Orange ahead. The first was a perfect header from a corner and the second was a neat finish from inside the box past the hapless goalkeeper. However, towards the end of the first half, Qormi responded very well and scored through Tensior Gusman, when a strong header gave keeper Craig Abdilla no chance. A couple of minutes before the break, Qormi also hit the crossbar with a powerful shot.

In the second half, Qormi just about edged it and their incessant pressure paid dividends when Michael Borg equalised in the 73rd minute with a well-taken free-kick. With the Orange tiring, coach Rodney Bugeja brought on some fresh legs in Matheus De Souza, Felipe Fernandes and Andy Shaw. All three players injected some much needed energy to the team. In the final stages of normal time, Qormi missed a golden chance to end the contest after a penalty was awarded and duly missed - echoing events of the league encounter a couple of months ago.

Both teams were very evenly balanced during the extra-time period, with Swieqi bringing on Gary Bugeja to freshen up the midfield. However, it was all smiles at the end when the Orange won 5-4 on penalties. Felipe Fernandes, Josuael Azzopardi, Marko Ivanovic, Alan Schembri Wismayer and Kyle Muscat all scored for the Orange during the shootout, while Matheus de Souza missed his penalty.

The Owls will now face Hamrun Spartans in a prestigious last 16 encounter.