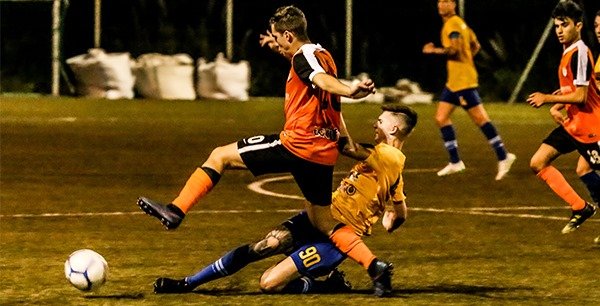 Swieqi United got back to winning ways in the U19 League last Tuesday, putting in an exceptional performance to earn a well merited 4-1 win against newly promoted Santa Lucia.

The game was barely 2 minutes old when Andrew Catania scored from close range past former Swieqi United goalkeeper Yandrick Cassar. Shocked by the early goal, Santa Lucia tried getting back into the game by being very dangerous on the counterattack, but Nathan Azzopardi and Sammy El Farsi marshalled the back-line well. Midway through the first half, Sasha Peric made it 2-0 and a couple of minutes later, Gabriel Hummel scored a tremendous shot from close to the half way line.

Apart from the goals, the first half was characterised by a great team effort and some deft touches and intricate passing - something that had not been seen by the Young Owls for quite a while.

The Orange increased their advantage further 5 minutes into the second half, making the score 4-0 on the night, when Hummel cut in from the right and squared the ball to Catania, who buried the shot past the hapless opposition goalkeeper. With 20 minutes to go though, Santa Lucia grabbed a consolation goal, but the Orange held on to claim a well merited three points.