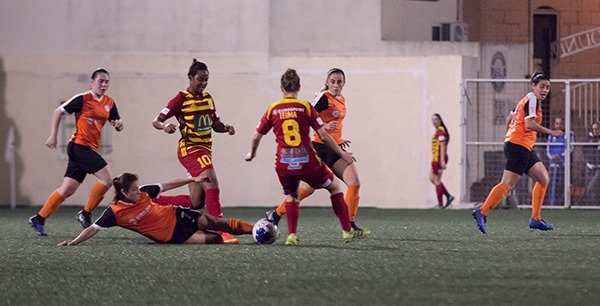 Although Swieqi United put in a gritty and determined performance against league champions Birkirkara FC in last week's league encounter, this unfortunately wasn't enough for the Orange, as they succumbed to a 4-1 loss.

Both teams were determined to prove themselves, and the match was fuelled with energy and drive from the first whistle. Whilst the Orange put some dangerous balls into the Birkirkara defensive zones, they also gave the Stripes food for thought in the way they approached the game defensively, with goalkeeper Vesna Vitanova making some stellar and the team's defenders blocking many dangerous balls.

Nevertheless, Birkirkara drew first blood in the 22nd minute, after an inswinging corner found Stephanie Farrugia, who duly scored for the Stripes. Minutes later, it was 2-0 to our opponents, who scored from a close range finish. However, the Owls got back into the match just before half time, after a low freekick from the right hand side landed in the box; with Chantelle Grech making no mistake to reduce the arrears accordingly.

After the break, Birkirkara FC came out all guns blazing, determined to block off the Owls from any goal scoring opportunities. Indeed, the Stripes managed to increase their lead early on in the second half, in the hopes of putting the game to bed. However, despite this setback, the Owls continued to put pressure on the Stripes' defence, with some excellent goal scoring opportunities from Dorianne Theuma and Jade Flask. Unfortunately, none materalised into the goal which would have set up a nail biting finish, and indeed, the Stripes added a further goal before the end of the match to make the score 4-1 in their favour.

Although not highlighted in the final score, this match was a valiant effort from the Owls, whose resilience and tact on the field shone throughout the match, which was played in front of a numerous crowd. The Orange will now face another tricky test against Mgarr Utd in two weeks’ time.