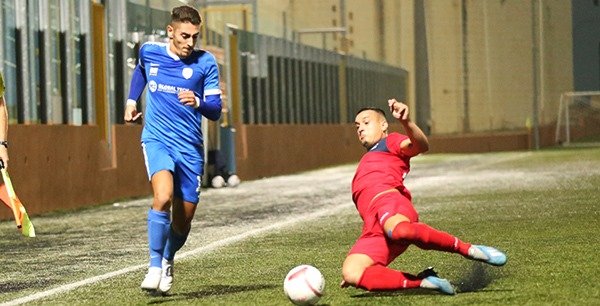 22.10.19 Seniors: Grit and resilience the key in derby triumph

The derby between Swieqi United and Pembroke Athleta saw the Orange come out on two thanks to two well-taken goals; a result that saw the Orange obtain their first ever win against Pembroke.

After a loss against Qrendi the previous week, Swieqi United were hell-bent on ensuring that a better performance would ensue in the derby. A young Swieqi United side took to the pitch, with the starting XI having an average age of 22.5 years on the day.

The Orange started strongly, threatening the Pembroke goal on several occasions. Their tactical prowess and discipline proved to be key components in this game. In the 16th minute, the Owls opened the scoring, when Marko Ivanovic's powerful header led to a goal-mouth scramble and Ibrahim Salis tapped in from close range.

Pembroke were especially dangerous on the counter-attack and also went close throughout the proceedings. Mid-way through the second-half, Pembroke were reduced to 10-men due to a second bookable offence. Merely a minute later, Roderick Taliana pounced on a defensive error to make it 2-0.

While the Orange could and should have scored more, the scoreline was kept respectable thanks to a masterclass from Pembroke's goalkeeper - who in particular produced a magnificent save from a Salis strike. In the 88th minute, Pembroke's Luka Mijic then made it 1-2, setting up a nervy finish, with a well taken shot past Edward Gatt. With a couple of minutes left to play, T.J. Ayorinde was also sent off for time-wasting.

Nonetheless, Rodney Bugeja's men managed to withstand a last minute onslaught to hang on to a precious three points and move onto 7 points in the embryonic First Division standings.