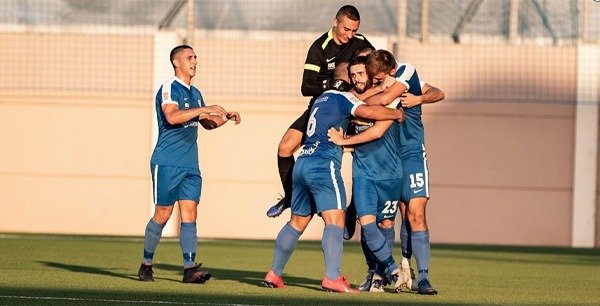 Swieqi United got their season off to a positive start this weekend, drawing 2-2 against Naxxar Lions in what was an entertaining and at times feisty match.

The Owls started off very brightly and had strong claims for a penalty turned down in the 3rd minute, when a Naxxar defender handled the ball in his own box. However, the referee waved play on. Undeterred, the Orange kept on pressing forward and were duly rewarded in the 18th minute - Tejumola Ayorinde's sumptuous cross was met expertly by the returning Roderick Taliana at the far post, who slotted it into the back of the net. After spending the entire 2018/19 season sidelined with injury, the goal was vindication for Taliana's dedication and professionalism throughout the most difficult period of his football career. The remainder of the first half then saw the ball played through the midfield often, but with no real notable chances for either of the two teams.

Naxxar came out of the dressing rooms all guns blazing, and equalised two minutes after the break thanks to a good shot from an acute angle by Jurgen Debono. The Lions, with the wind in their sails, kept on pressing and duly hit the post three minutes later. Sensing the need for a change, coach Rodney Bugeja then switched Ayorinde for debtuant Felipe Fernandes, and the substitution saw a shift in momentum in the Owls' favour, as Fernandes' neat footwork and build up play caused the Lions all sorts of problems at the back.

Swieqi then deservedly retook the lead in the 66th minute, after Ibrahim Salis headed home Marko Ivanovic's cross into the box. Afterwards, the Owls kept on pressing to try extend their advantage, with Fernandes coming closest after his bicycle kick from the 11-metre mark hit the crossbar. However, in the last minute of the game, Naxxar equalised - a foul in the box saw a penalty given and Gilberto Carrara Martins Leite made no mistake from the resultant spot kick, which was the final kick of the game, stealing a point for the Lions at the death.