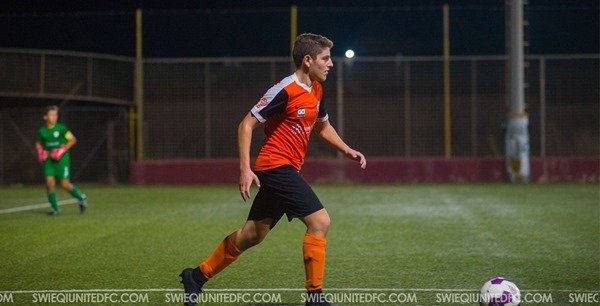 Swieqi United faced Tarxien Rainbows last weekend in the Club's debut match to kick off the 2019-20 season, starting the season off strongly with a comprehensive 5-1 win.

While Tarxien started off the stronger of the teams, as the first half progressed, the Young Owls started playing with more confidence.
It was no surprise that the team started controlling the game, and a long ball in between the two defenders by Simon Gingell found Thomas Meli Bugeja's super touch, which took him into the box, finishing the action with a great shot into the bottom corner. Shortly after, Anthony Bartolo's through ball to Kieran Mifsud freed him to slot the ball in the bottom corner, doubling the score for the Orange, as the boys went into the break with a comfortable lead in hand.

After the break, it was all Swieqi again. Julian Mifsud's cross found Andrea Lorefice, who towered high and headed the ball in the top corner to make it 3-0. Thereafter, while the Young Owls conceded a goal to give the Rainbows some hope, they were nonetheless extremely professional in their reaction after the goal. A neat counter attack from Max Camilleri saw the ball passed to Ben Azzopardi, who saw his left-footed volley hit the top corner; and to close the game off, Tarxien's centre back headed the ball past his own goalkeeper to secure the three points for the Young Owls with a convincing 5-1 win.

Next up for the Young Owls is a tricky test against Balzan FC. Good luck Orange!