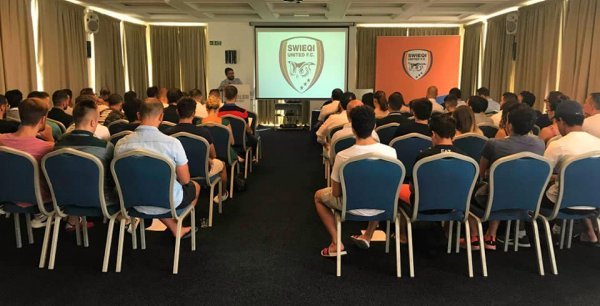 Swieqi United showcased its preparations for the forthcoming season by hosting its traditional Season Launch at the Cavalieri Hotel, St. Julian's, for the Club's players, partners, sponsors and media.

In his initial comments, President Dr Justin Fenech said that the eleventh season of this Club would see the launch of 'Swieqi 2.0' - the foundation stages for the direction the Club should be taking in the next ten seasons. Dr Fenech stressed throughout his speech the importance of this Club being part of the greater picture, making reference to the community aspect of the Club, while praising those individuals who have given up and continue to give up their free time voluntarily to make the Club the success story that it is today. He also touched upon the importance of funding and how the Club is open to various avenues in this respect, stressing on how while Swieqi United can have some fantastic ideas, if the funds are not in place, then those ideas cannot come to fruition.

Roderick Borg, representing the Club's media department, outlined the need for the Club to continue strengthening its presence, especially on social media, while alluding to the fact that the media arm of the Club is closely linked with the events and business departments, in order to promote the Club holistically. Giulia Muscat, representing the events department, spoke about the importance of fundraising and mentioned several events that the Club shall be organising throughout the year, in fulfilment of that aim. Timothy Gingell, from the Club's business department, then spoke about the work that the Club has been doing in this sector, including the launch of the Swieqi Sports Association business card, negotiations with several sponsors, and the imminent launch of a lottery, as regulated by the Malta Gaming Authority (MGA).

The Club's Head Coaches also took to the floor, with Rodney Bugeja (Men Seniors), Keith Gouder (Women Seniors) and Damon Shaw (Futsal Seniors) all outlining their respective aims for the season. This was also echoed by coaches Gilbert Micallef (Men's U19) and Andrea Vella (U17), who spoke about the importance of the Club's academy and the continuous development and promotion of youths at that level.

Also invited on the panel were Swieqi mayor Noel Muscat, who has constantly supported the Club since its inception and wished the Club the best of luck for the forthcoming season; Malta Football Association (MFA) Vice-President Dr Matthew Paris, who spoke about the removal of the outdated parameter system; and Malta Football Players' Association General Secretary Carlo Mamo, who praised the Club as a positive model in terms of structure and organisation.

In his concluding remarks, Dr Fenech alluded to the fact that the Club's objective has always been to change Maltese football for the better and to help the MFA to take Maltese football to the next level. He concluded by saying that Swieqi United is a club that walks the walk and talks the talk, even if this has to come at a certain cost on occasions. The Club's philosophy of 'One Team - One Club' rings true across the board, and this is something that the Club will continue to strive for in the coming years.