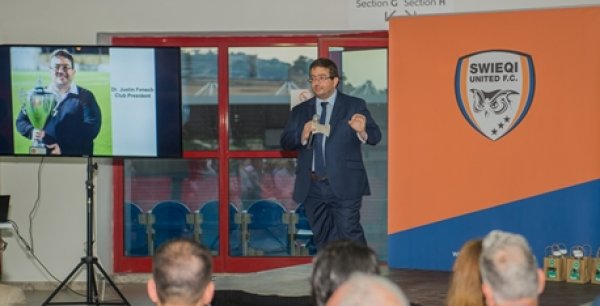 Dr Matthew Borg, who hosted the ceremony, opened proceedings by showing guests a video clip showcasing highlights from the Club's first ten years in local football, before giving a brief introduction about the ethos of the Club.

Club President Dr Justin Fenech then took to the floor and affirmed how although ten years have passed since the Club's formation, it has come on in leaps and bounds since its origins. Going forward the Club had to stay true to its values, its community and its philosophy. "Our strength does not come from wealth but rather from hard work, organisation and the people that make our vision a reality”. He concluded by saying that with everyone pulling the same rope he was more than ready to lead this club onto bigger and greater things in the coming years.

Dr Matthew Paris, Vice-President of the Malta Football Association, also had some nice words to say about the Club, stating that Swieqi United is the proper definition of a success story and that if the Club continued to operate in the manner that it operated, with a solid structure in place, the Club would continue to progress accordingly.

Noel Muscat, Mayor of Swieqi, also gave a short speech, whereby he stated that what the Club has managed to do is give a sense of community to all its members, as well as foster an identity for the locality of Swieqi. He continued to augur the Club further success in the future.

The awards for various squads were then presented. The winners in each category were the following:

MFA Presidential candidates Bjorn Vassallo and Dr Chris Bonett attended the event and wished the Club the best of luck in the years to come.

A reception was then held afterwards for all attendees at the Trophies Lounge, capping off an enjoyable evening for all and a memorable season at the Club.