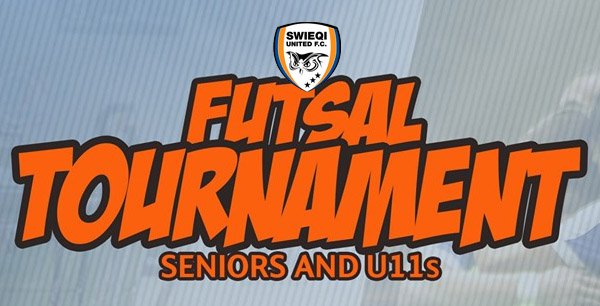 Swieqi United was formed on 14th April 2009, by two University of Malta law students, Ralph Agius Fernandez and Michael Calleja, and the club has been hosting various events to celebrate the coming of age and to promote each of its teams.

This coming weekend is the turn of the rapidly growing Futsal section. As part of the weekend, on Sunday morning there will be an under-10s tournament. At Swieqi United’s academy, all children between ages 8 and 11 train Futsal once per week with Senior manager and UEFA A Licenced futsal coach, Damon Shaw, with even more age groups to be added next season.

'The Club has really embraced Futsal and we want to put a model in place that gives the Futsal team a bright future, but also that will improve the technical and tactical ability of all the players in the club,' said Shaw.

'Next season, we will have dedicated teams at Under 17 and Under 15 level to compliment the two senior sides, and the football Under 13s and below will continue to play Futsal once a week, with an increase in matches throughout the season to compliment their football. At Swieqi United we will create a very different type of player.'

Vice-President Robert Dingli said, 'We are delighted to be welcoming Bolton FC to Malta, together with the other local Maltese teams who shall be participating in such Futsal tournament to celebrate the club's tenth anniversary. We are confident that this tournament will continue to raise more awareness about the beauty of Futsal and we hope that it will attract more people towards the sport, whether it would be as players, coaches, administration or spectators. We wish the best of luck to all teams and we look forward to an enjoyable tournament played within a fair play environment.'

Entry this weekend to watch the matches is against a donation and there will be food stalls, a raffle, and information stands about Futsal at Swieqi United, with staff on hand to give you information.

The tournament will open at 12:30pm on Saturday 11th May with a press conference by each of the coaches and club president, Justin Fenech, with the opening match at 2pm. The senior final is scheduled to kick off at 12 noon on Sunday 12th May. The Under 10's tournament will be played between 8am and 10am on Sunday morning.

For further information about the tournament, including times and results, you can visit the club’s facebook page: www.facebook.com/swieqiunited