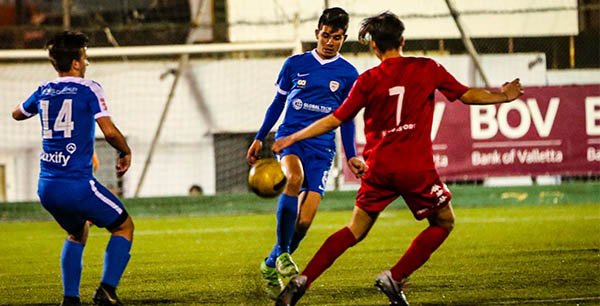 On a warm evening at the Sirens Stadium, it was one way traffic throughout as Swieqi United defeated Kirkop United 4-0, in a display of free flowing football, to close in on securing third place in the Youth League Section B standings. Kirkop, on the other hand, were officially relegated to Section C as a result.

The Orange dominated the first half, with various through balls penetrating the opposition defence and giving the team various opportunities to shoot at goal. Luke Taliana was in no mood to fool about, putting the Owls at an early advantage with two opportunistic goals, before Andy Shaw managed to dribble the keeper in a one on one situtation and walk the ball home into an empty net, for a comfortable 3-0 scoreline at half time.

After the break, the Owls took their foot off the accelerator a little bit and were more relaxed, but nonetheless ensured that they saw out the match with the utmost of professionalism. Towards the end of the match, substitute Andrew Tortell scored the Orange's final goal - his first competitive strike in three years.

Swieqi United will round off their commitments when they next face promoted side Melita in the derby next Tuesday.