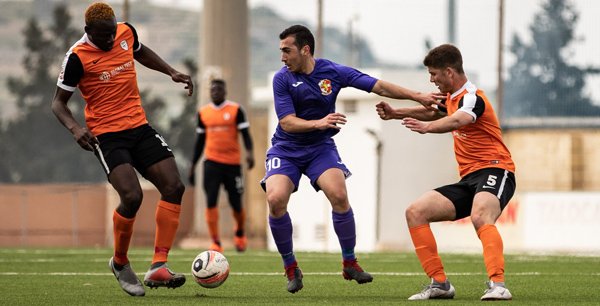 Swieqi United were once again unlucky in their fixture against Naxxar Lions, as for the second time this season, they fell to a last minute goal that sealed the deal for the opposition, losing 2-1 in the process.

Naxxar spent most of the game with ten men, as Steve Meilak was sent off for a reckless challenge on Shaun Bugeja in the 25th minute. This incident in fact dictated the passage of play throughout the first half, with Naxxar content to sit back and absorb a large chunk of pressure from the Orange's midfield and forward line.

In the 55th minute, the Lions took the lead with their first real action of the match - an inswinging corner met the unfortunate head of Tejoumola Ayorinde, who headed into his own net, with goalkeeper Edward Gatt stranded. With a lead to protect, Naxxar had no real interest in going forward, and indeed, the Owls could have equalised on at least three occasions - Ayorinde missed two good chances, with one of them hitting the post, while Luke Scicluna had an effort that hit the crossbar.

The game then sprang into life in injury time. Swieqi United thought they had finally gotten a well deserved point after confusion in the Lions' box resulted in another own goal being scored, this time by Benjamin Essel. However, literally a minute later, Naxxar striker Saturday Nanapere had the last laugh with a crisp finish that left Gatt well beaten.