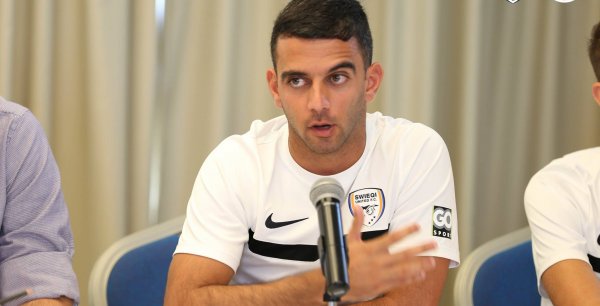 17.04.19 'The way in which this Club is built allows progress and growth' - an exclusive interview with Andrea Vella

Synonomous with Swieqi United's fledgling Academy, Andrea Vella has managed to build a self-sustainable and well-managed sector of the club with the sole aim of creating and moulding Swieqi United's future professionals. The Club's Media Team took the time to speak to one of Swieqi United's stalwarts...

SUFC: Hi Andrea. Thanks for taking the time to talk to our Media Team. You've been ever-present at Swieqi United since 2013. Can you briefly tell us what attracted you to the Club in the first place?

AV: Very simple - the meeting I had with the President Dr Justin Fenech. I had a couple of other interesting offers, but his vision was so clear that it was a no brainer to accept. The way in which he spoke about the Club, his ideas and how he'd like the club to be 'different and better', and instil a holistic approach towards Player Development through football and other sports, was music to my ears.

Starting any Academy from scratch is always a challenge, but having the opportunity to instil fresh ideas, methods and values from the start really excited me and drove me to go for it. The way in which the Club is built allows progress and growth to take place. You need to be a bad leader to fail at Swieqi United FC.

SUFC: As Head of Academy, can explain to readers what your role entails?

AV: I am responsible and accountable for everything that happens at Academy level from the U4 up to the U17 age groups, the coaches and the delivery of their respective programmes, other staff members, and the parents. I also coach a fantastic group of players, the U17's, because I love working on the pitch, like many coaches!

SUFC: In 2017, you were given a full-time professional contract by the club. How ecstatic were you by the prospect that you were finally about to embark on a new journey?

AV: A dream come true! To be honest, I wasn't expecting the club to make such a proposal at such an early stage. [President Fenech] was so sure and decisive that this was the next step to take the Academy to the next level, and even though I had graduated as a PE teacher the previous June, I accepted the challenge and put pen to paper to a four year deal. Personally, I am proud of such a move, because at the time we were only the second club with a full-time coach at Academy level.

SUFC: The SUFC Academy started has blossomed from a few kids to an organisation with over 190 children. To what do you attribute this astonishing success?

AV: Our staff! The technical staff have been great over the last couple of years. Hats off and well done to them for believing in our vision and dream and helping us to achieve a lot in such a short time.

The club has been incredible in providing us with the necessary support to offer the best services possible; I thoroughly believe that with a Technical Director and myself, three coaches per age group, together with supporting staff, specialised staff, physiotherapists, team managers, doctors, a club administrator and the necessary investments taken, facilities wise, to allow the players to develop in the right environment and structures, and most importantly, by always wanting to do more and get better, it had a positive domino effect on everyone at the club. One Team - One Club in our case!

SUFC: What are your favourite highlights throughout the past six years?

AV: That's a tough one! I believe the Academy's growth and sustainability, together with a great deal of growth number-wise but even quality wise, despite our limitations, has been the best achievement for me.

SUFC: You've been fostering relationships with foreign clubs and coaches. Can you briefly tell us how that project is going?

AV: Every year, the club does its best to develop new contacts in various countries across Europe. We visited a number of clubs recently, the latest ones being Merthyr Town in Wales, Rapid Vienna in Austria and Dunjaska Streda in Slovakia.

Our notable contact is well-renowned half Dutch half German coach Peter Hyballa, who accepts our invitation to deliver work in Malta, but more importantly, to quality assure what's happening in and around the club. It is that feedback which we lack in Malta, that someone who is all the time on your neck, by your side, and pushing you to reflect on your actions.

Apart from this, we are in talks with other clubs from Holland, Estonia, England, Norway and Italy to develop a number of projects together.

SUFC: Swieqi United celebrated it's tenth anniversary this year. Can you pay tribute to the club's achievements [especially at Academy level]?

ANDREA: The club, the coaches, the parents and the players! Everything is linked - without one, there wouldn't be any progress; or at least, the progress required or desired. On the pitch we have had some positive results as well, and that is because of hard work that occurred in the past by building the foundations for us to enjoy success in the long-term. We have a dream, and we're aiming to go for it - Dare To Believe!

SUFC: Thank you for your time, Andrea!