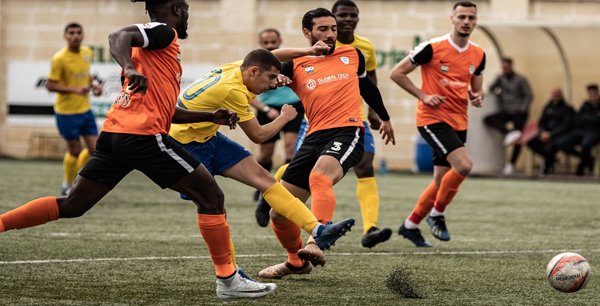 A gritty and determined performance proved to not be enough for Swieqi United in last weekend's encounter with promotion chasing Santa Lucia, with the Owls losing 3-1 in a balanced encounter. The loss also put to bed the Orange's slim hopes of finishing in the top three this season.

Santa Lucia started very brightly and even had a penalty within the first six minutes, but the resultant shot was blazed over the bar. Their incessant pressure on the Swieqi United goal eventually paid off, as they opened the scoring after 20 minutes thanks to a fine strike from Jurgen Suda. This goal sprang the Orange into life, gaining more confidence on the ball and attacking the Santa Lucia goal more frequently. Indeed, when Ibrahim Salis equalised in the 33rd minute, the goal was deserved as the Orange had had the upper hand in proceedings.

After the break, Santa Lucia came out all guns blazing, and took the lead once again with a goal from Keith Vella. In an attempt to get a result from the game, coach Rodney Bugeja made some attacking changes, but the Santa Lucia defence was admittedly equal to what the Owls threw at them throughout. The yellows then put the cherry on the cake with a goal from Luis Mosquera one minute into additional time, boosting their promotion aspirations in the process.

Swieqi United will next take on Naxxar Lions before concluding their First Division commitments with a game against champions-elect Sirens.