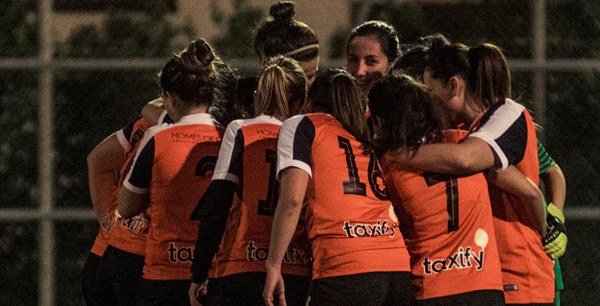 For a second time in this league, Swieqi United and Luxol faced each other in yet another gripping match. Right until the final whistle both teams were hoping to bag the 3 points to improve their respective standings.

The first half presented a good balance of attack and defence from both teams, leading to a lot of the action being played in the midfield. Nonetheless, the Owls fought for every open opportunity they saw.
Amy Galea Gingell’s first shot on target in the match darted like a bullet from outside the box which bounced right off the goalkeeper’s hands on impact. Krista Montfort was only inches away from reaching the ball and finishing the job. The team held their breaths when Simone Buttigieg was on a strong run with the ball towards the centre of the pitch, only for her to be tackled down steps away from the box, a foul which the referee sanctioned with a yellow card. Elise Abela delivered a spectacular free kick which unfortunately found no one to tap into the goal post from the goalkeeper’s right side.

With the first half gone, the Orange entered the field with more determination and tact than before, this helped them to dominate over the second half. Within minutes, Montfort saw a golden opportunity, crossing to Yolande Attard who attempted the shot, however this was too high and curved right over the post. With space outside the box for a second time, Attard attempted yet another shot which was blocked by an intercepting defender.
With less than 10 minutes to go, an attempt to clear the ball erroneously created a dangerous opportunity for our opponents which was beautifully saved by substitute goalkeeper for the night Vesna Vitanova.

With tensions fully mounted in attempt for both teams to break the deadlock and just minutes to go, the ladies in Orange fought on. The final window came when Attard attempted yet another shot which bounced off the goalkeeper’s hands giving Swieqi Unitesd a golden opportunity to take the lead. Unfortunately, no one was close enough to finish the job and the whistle was blown at a score of 0-0.

This was not the first time in this league that Swieqi United dominated the field and left the pitch feeling like their efforts and skill were not reflected in the final score. Certainly, this score will present them with added pressure in the upcoming games but they will continue to fight and persist as they always do to reach the levels they deserve.