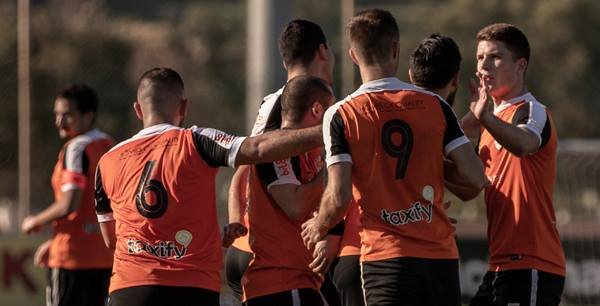 Swieqi United claimed a deserved and well-merited win after a very tough encounter against a physical and aggressive San Gwann, emerging 1-0 winners in the derby with a goal right at the death to secure the three points and inch closer towards the seasonal objective of survival in the First Division.

The Yellows started the brighter of the two sides and compelled Jean Debattista to perform some acrobatic heroics throughout the first half. What compounded matters for the Orange was a serious injury to Shaun Bugeja (leading to his substitution), while Melvin Farrugia also had to be stretchered off for a brief period of time.

In the second half, Swieqi United started off on the front foot and managed to grab the initiative, beginning to slowly and patiently build up from the back. With San Gwann content on playing on the counter, the Owls pressed forward and were awarded a penalty in the 82nd minute, when a rasping shot was hand-balled in the box. Ion Alin Margarit subsequently made no mistake from the spot.

In the final few minutes of the game, the Orange had to dig deep to withstand a ferocious backlash from their opposition, but in the end, it was all smiles for Rodney Bugeja's men, who secured the double over their regional rivals and embroiled them further in the relegation mix. Well in Orange!