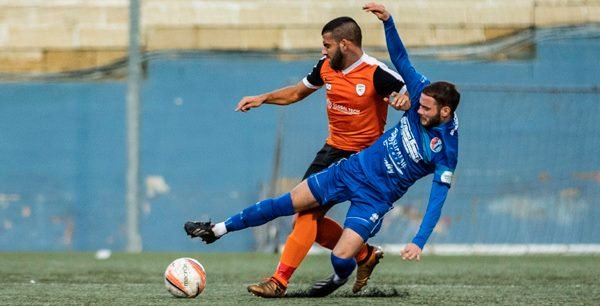 Swieqi United professionally dispatched of Zejtun Corinthians 3-1 at the Victor Tedesco Stadium to make it four wins in a row in the BOV First Division. The Orange stay joint-fourth with Lija Athletic, one point behind Gudja United in third.

Zejtun came out of the blocks all guns blazing, intent on attacking down Swieqi United's right hand side in particular and looking to exploit that area of the pitch. Indeed, in the opening ten minutes, the Corinthians had a couple of chances that could have easily ruffled goalkeeper Jean Claude Debattista's feathers. Nonetheless, practically with their first attack of the game and against the run of play, the Orange took the lead, as a Mirco Vella curler from outside the box found itself into the top corner of the net, leaving the opposition goalkeeper with no chance.

Swieqi United started the second half in a much more assured fashion, with a foul on Gianluca Calabretta in the box allowing them an opportunity to take the lead again. Calabretta duly scored his fifth goal of the season after making no mistake from the spot. The Owls then controlled the game throughout, barely putting a foot wrong and hardly allowing Zejtun any chances on goal.

The complexion of the game then changed in the 77th minute, after Lesley Cassar Jackson was harshly sent off for allegedly disallowing a clear goalscoring opportunity. Zejtun, however, failed to capitalise on their man advantage, and deep into stoppage time gave way another penalty, after a foul on Tejumola Ayorinde in the box. Ayorinde then stepped up to convert the penalty and seal the result for the Orange.