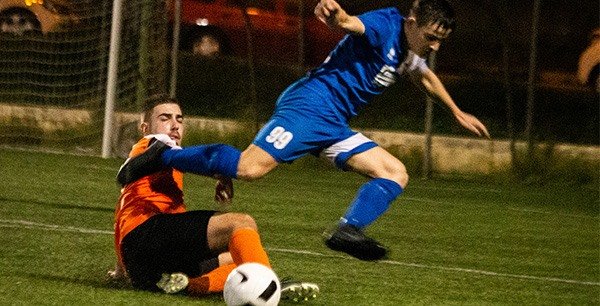 A strong second half display by the boys in Orange propelled Swieqi United’s minors team into the next phase of the Youths Knock-Out competition with a 2-0 victory against Tarxien Rainbows. The Orange were dominant throughout and were always in control of the match. A spirited display in the first half by Tarxien Rainbows proved to be insufficient to keep the Boys in Orange at bay in the second.

Swieqi United started the game strongly and proved menacing when attacking down the left - Taliana and Ayorinde linked up perfectly on the left wing of Swieqi United’s attacking department. From the first occasion, the density around Swieqi United’s left wing created space for Perić on the right; his volley beat the Tarxien goalkeeper but did not beat the upright, as he saw his effort smacking against the post. A similar action on Swieqi United’s left again saw Perić beating his direct marker and shooting wide, albeit from well-inside the penalty box. The young winger was a constant thorn in the Tarxien defence. Timmy Muscat, fresh from his first goal for the Orange in the previous match against St. Patrick’s, nearly made it 2 in 2 matches as his long effort hit the crossbar and drifted wide of the Tarxien goal. Tarxien could not recover from these shocks, and Ayorinde twice came close to opening proceedings. However, both efforts were high and wide and did not produce the desired results. The 0-0 first half result left the Orange somewhat flustered and frustrated.

After a sound half-time team talk directed by coach Gilbert Micallef, the Boys in Orange emerged from their dressing room with renewed energy and motivation. This rubbed off evidently, as after a well-orchestrated move, Swieqi United nearly managed to open the scoring through Ayorinde, who saw his shot parried by the Tarxien goalkeeper. However, a few minutes later, Tarxien’s defence could only watch in awe as another quick action starting from Gatt and Bugeja ended up with a beautiful Luke Zammit long shot which hit the back of the net to send the Swieqi United faithful to raptures. The goal gave the Orange their much-needed confidence boost - Tarxien resorted to booting the ball up the pitch into no man’s land with the slight hope of finding an attacker roaming the Orange’s half. Ayorinde was again called in action after being put through by Taliana. His second effort, a low left-footed shot, beat the Tarxien goalkeeper once again to close off the encounter and seal Swieqi United’s passage into the next round, where they meat rivals Melita A.F.C.