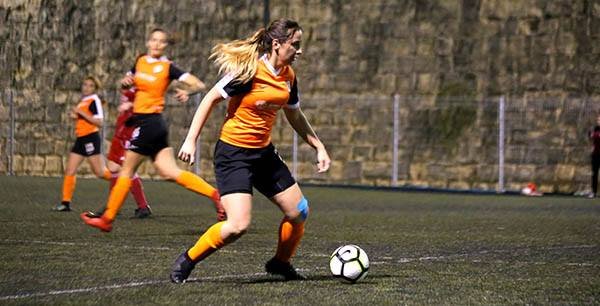 A truly valiant effort by our women in Orange left a bitter taste after coming away from a thrilling encounter against Fgura United with a single point. Despite trailing by three goals at the end of the first half, the performance on the pitch warranted a better outcome.

Swieqi United blazed out of the starting blocks when striker Eliza Csik scored the first goal in the 3rd minute when she rounded the keeper and slotted home in an empty net. The blistering start to the game continued as Swieqi United bombarded the Fgura defense and came close to extending their lead with two free kicks.

Yet in the 9th minute, Fgura United took advantage of a lapse in defense as their striker found herself alone with the goalkeeper and made no mistake to make the score 1-1. The goal appeared to have rattled the Orange as only two minutes later, they found themselves 2-1 down as once again poor defending was exploited by Fgura United.

Tensions were high between both teams as Fgura United were adamant to maintain their advantage in the game and Swieqi United were determined on shifting the advantage in their favor. In the 19th minute, Swieqi United were presented with a golden opportunity to level matters when striker Csik was brought down following a nasty tackle inside the area leaving referee Agius no choice but to point to the spot. Simone Buttigieg stepped up and made no mistake as she effortlessly slid the ball to the keeper’s lower left, levelling the score at 2-2.

This topsy-turvy game took another twist only 2 minutes later when Fgura United edged ahead once again. Things went from bad to worse for Swieqi United as they conceded a penalty. The referee pointed to the spot for the second time in the evening and Fgura United extended their lead with a successful penalty. The frantic first half ended with more misery for Swieqi United as Fgura United found themselves 5-2, leaving the Orange with a mountain to climb in their search for victory.

Elise Abela gave Swieqi United a glimmer of hope in the 50th minute after her superb free-kick sailed right into the back of the net. This goal gave the girls the confidence they needed and inspired them to chase the game with all their effort. Wave after wave of attacks from Swieqi United forced Fgura United into some frantic defending and their efforts were duly rewarded as Amy Galea Gingell reduced the deficit to one in the 87th minute to ensure a nail biting last few minutes. Indeed, the scoring didn’t end there as Yolande Attard completed the miraculous comeback leveling the score at a remarkable 5-5 in the 89th minute. There was even enough time for another effort by Yolande Attard to leave their opponents empty handed but her effort rebounded off the post in the dying minutes.

Ultimately, this truly exhilarating game came to a close with neither side leaving the pitch with the much sought-after victory. This 5-5 thriller was a great display of plenty of good attacking football on show.