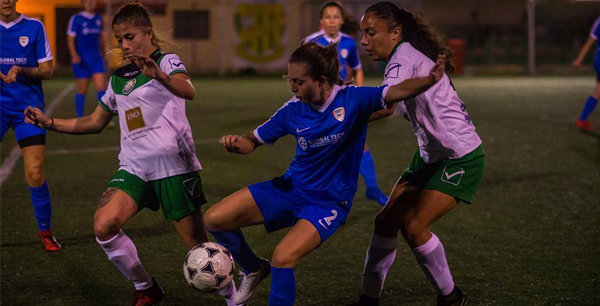 The first half kept spectators on edge as possession shifted from one team to the other, thus changing the play frequently. Early on in the match, a missed opportunity from Swieqi’s striker Janice Spiteri could have given the Orange the boost they needed for the rest of the match, after a back pass from the opposing team to their goalkeeper was not caught and bounced out of reach. Following this, Mgarr pressed on with a couple of shots aimed at goal, which were blocked off by Yolande Attard. Eventually, the resolute Swieqi United backline was broken as Mgarr took the lead in the 29th minute, after Hayley Bugeja put the ball in the back of the net with a good header.

Despite the team’s determination to grab an early goal and change the game, the Orange were faced with an uphill task when they conceded two early goals in the opening five minutes of the second half. Two minutes later, Attard managed to grab a lifeline for Swieqi United with a well taken curling effort from outside the box. A brave team effort ultimately proved futile and the goal proved to be a mere consolation, as Mgarr secured their fourth and fifth goals in the 78th and 80th minute respectively. To make matters worse, goalkeeper Mandy Caruana was also forced off the pitch after suffering a nasty blow to the chest. We wish her a speedy recovery!

Notwithstanding the heavy defeat, the team did not stop running, trying as hard as they can to make the scoreline less drastic. They will look to make amends in their upcoming match against Fgura next week.