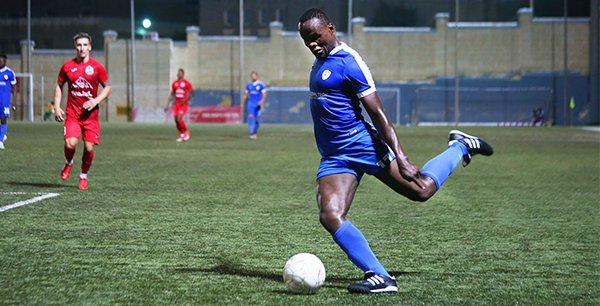 In need of no introduction, Swieqi United's Nigerian striker Kenneth Ekezie made history as he became the first ever player to score for Swieqi United in all three competitive divisions in which Swieqi United have competed.

Ekezie joined Swieqi in 2013 and immediately grabbed a hat-trick on his league debut in the Third Division, when Swieqi United took on Ta’ Xbiex SC. He managed to repeat the same feat one year later when he scored on the club's debut in the second division against Mellieha.

Having enjoyed a brief loan spell with Marsaxlokk last season(2018-2019), Ekezie once again joined Swieqi this summer and notched an important header against Zebbug in the first Division to reduce the gap in a tight game.

From all at Swieqi United FC, we sincerely extend our warmest congratulations to 'Kenny' and wish him and the team all the best for the rest of the season.