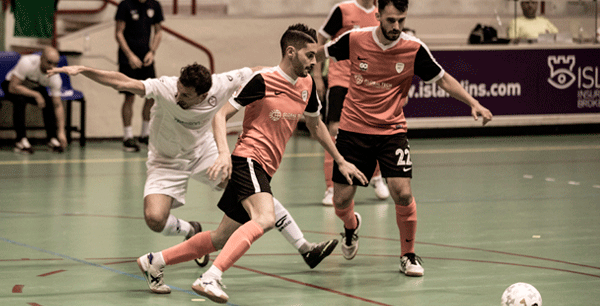 Swieqi United continued their good run in the MFA Futsal League with a well-earned 4-2 win over last year’s Cup winners, University of Malta at Corradino Pavilion, despite going behind early in the first half.

While Swieqi dominated possession and chances, it was a counter attack that led to the opening goal. Good play by captain, Dusan Rakic saw Rodney Debono with a chance to put his new team 1-0 up against his former team but he shot was saved and Neil Cauchi slotted home in an empty net.

It took until the 17th minute for Swieqi to turn their dominance into a goal when Uruguayan international Navarro played in player coach, Bobo Marev whose pass was turned into the goal by a UOM defender. Within a minute, Swieqi had the lead, again down the left as Navarro skipped past a player and found Malta international Andre Ciancio waiting at the far post to give United a half time lead.

The second half continued much in the same vein as the first – mostly in UoM’s half as the stats can testify – 52 chances for Swieqi to 11 for UoM in the match.

In the 26th minute another forage down the left wing by Navarro set up Stefan Camillieri for his 2nd goal of the season after the keeper had deflected the Uruguayan’s effort across goal out to the well placed Camillieri who made it 3-1.

With 10 minutes left of the match the students capitalised on a break to give Swieqi a nervy end to the game. A long throw from the superb keeper found Daniele Degennaro free on the right who shot across Cipriott into the far corner and suddenly Swieqi were in danger of giving up another three points.

But a calm period for the title outsiders saw UoM chasing the ball and eventually Leo de Souza, formerly of Blumenau Futsal in the Brazilian LNF exploited the space in behind the defence and slotted home nicely to seal a vital win for Swieqi before the showdown with Valletta FC on Tuesday.

“Another tough game, but we were the much better side and we should have been clear in the first half but with their keeper on top form and our finishing a little suspect we made it difficult for ourselves. We played calmly and managed to take the three points,” said Shaw.

Next up for Swieqi United are reigning champions Valletta FC on Tuesday, while the under-21s face University of Malta on Thursday.