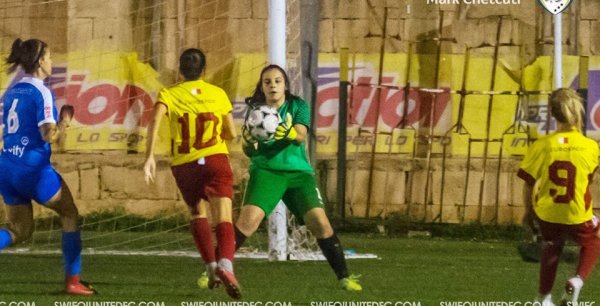 26.10.18 Women: Impressive display against the champions

In what was a close encounter, defending champions Birkirkara were ultimately too strong for Swieqi United, with the former's class showing in edging out the Orange 2-0 to end the Owls' positive start to the campaign.

One could argue that during the match, tensions ran high from start to finish. The Swieqi United players were constantly alert and focused, defending as much as they could but also creating some opportunities which were potentially dangerous for Birkirkara.

The first opportunity for the Orange came from Krista Montfort, attempting a shot at the goal from a distance following a free kick from Kate Galea. Soon after, however, Birkirkara opened the scoring, as Sarah Urpani's shot direct from a corner ended up in the back of the net.

Montfort managed another shot on target at the beginning of the second half, but literally a minute later, Birkirkara got their second of the match, Raina Giusti the scorer. Swieqi's best chance to reduce the arrears came from a free kick taken by Galea, but the ball was adjudged to have not crossed the line, thereby capping a frustrating evening at the office for the Orange.