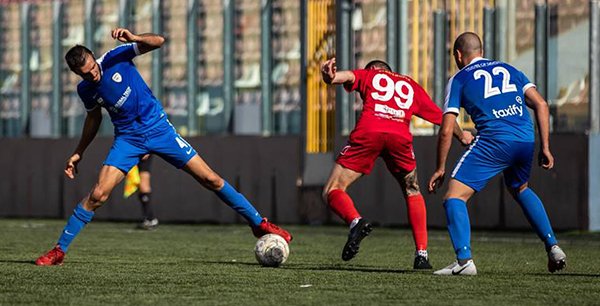 08.10.18 Seniors: Swieqi pay the penalty in defeat to Vittoriosa

Swieqi United were made to pay for a missed penalty opportunity, having a man sent off and conceding from the penalty spot in a very topsy-turvy encounter at the Victor Tedesco Stadium in Hamrun.

Despite starting the brighter of the two, the Orange failed to score during the first period of play as their finishing let them down. Attack after attack was repelled by the Vittoriosa defence. In fairness, the Reds themselves were dangerous going forward and the Owls were made to dig deep throughout the first forty-five minutes. The best chance of the half fell to Tejumola Ayorinde, whose shot hit the post.

In the second half, Swieqi started slowly, although, after building some momentum, won a penalty towards the beginning of the half. Unfortunately, Tejumola Ayorinde's low shot was saved by the opposition goalkeeper. A few minutes later, Shaun Bugeja was very harshly sent off for a second bookable offence, and Swieqi themselves then conceded a penalty, which was duly converted by Jojo Joseph Ogunnupe in the 74th minute.

With a man down, Swieqi found the going tough yet still continued to play good football. In the dying minutes of the game, Ayorinde's fierce shot rattled the crossbar, capping an unlucky day at the office for the Orange.