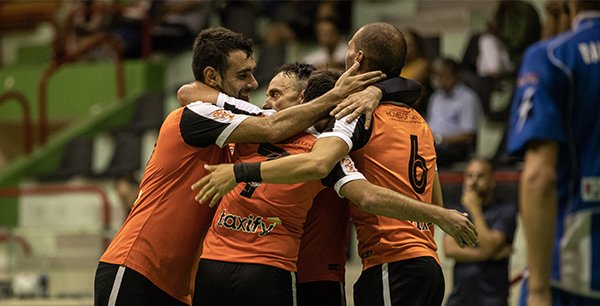 Swieqi United’s Futsal team got off to a winning start in the Malta FA Futsal League on Monday night at Corradino Pavilion, seeing off a spirited Pieta Hotspurs 6-2 to go top of the league for at least twenty-four hours.

News that foreign trio Dusan Rakic, Leo de Souza and Maxi Navarro were unavailable did not deter the Maltese players and player/coach Bobo Marev, who showed resilience and that they had enough to put the game to bed in the second half when Pieta tired.

Leo Muscat, signed from cup winners University of Malta, put Swieqi ahead on his debut but with Swieqi on five fouls quite early in the first half, Pieta pressed on, knowing that any further fouls would result in a penalty. They eventually won two, the first with a couple of minutes remaining on the clock from a foul on the edge of the area that was slotted home by Karl Sciortino.

Rodney Debono then gave away a foul in the Pieta half with one second on the clock, but the resulting spot kick was shot wide once again by Karl Sciortino, keeping the scores level going into the half time break.

The second period started just as tensely as the first, with neither team wanting to give up the next goal. Coaches Marev and Damon Shaw had rallied their troops in the break and it was captain Andre Ciancio that delivered the breakthrough, arriving at the far post from Marev’s pass. Marev then turned goalscorer before Dylan Micallef and Stefan Camilleri put the result beyond doubt and Leo Muscat got his second shortly after to seal the three points.

A consolation goal for Pieta meant the final score was 6-2 and the Swieqi United players and staff could celebrate a meaningful victory.

“We knew it was going to be a tough match and when we knew we’d be without three key players. This made it even more important to motivate the players and give them belief. Victory was important, but the win will have given the Maltese players a huge confidence boost and when Maxi [Navarro], Leo [de Souza] and Dusan [Rakic] return we will be even stronger,” said Damon Shaw.

“Bobo [Marev, player-coach] has really pushed the team in pre-season and that showed with a strong second half, when Pieta were flagging. I’m really pleased for boys who deserve the win and can enjoy the fruits of two months of hard work.”

Swieqi United U21s don’t play this week as Valletta are in UEFA Futsal Champions League action, so they will debut next week against UM Academy, while the Seniors play Birkirkara Futsal on Tuesday.