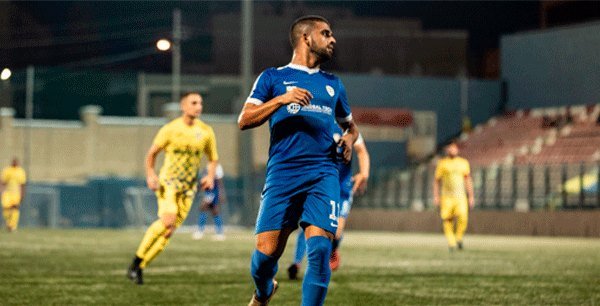 Although the 3-1 win against San Gwann, in Swieqi United's first ever First Division match, was a monumental team effort from everybody involved, one person marked his return to the football pitch with a bang: Mirco Vella.

Vella, who has spent the last five months on the sidelines, scored all three goals in the said victory, capping a memorable return to the field, and told Swieqi United's media team that he couldn't be more elated and proud to be part of this club.

Matthew Borg sat down with Vella to listen to his post-game reflections and ask him about his injury ordeal, his feelings after that match, and life in general at Swieqi United.

SUFC: Following the Club's debut First Division win against San Gwann, can you express the feelings you felt at the end of the game?

MV: I was honestly lost for words and I felt an array of different emotions. This Club has come a long way and managed to prove the doubters wrong in every division. To play First Division football is already a huge achievement; starting off with an impressive 3-1 win against a more experienced team in this league was the cherry on the cake. After the game we truly felt as though together, as the same group, we wrote another page in Swieqi’s short but rich history.

SUFC: How satisfying was it to score a hat-trick, especially after coming off the bench?

MV: It was not only my first hat-trick for the club, but it was my first ever official hat-trick, so it was even more difficult to digest what had just happened. Scoring the first ever goal for Swieqi in the First Division was already a huge honour for me; scoring a hat-trick on the club’s debut was even more surreal. I can't put into words all the emotions I was feeling, but I obviously couldn’t contain my happiness. Obviously, every player wants to start every game, it’s normal; but as soon as the coach called me up, I understood that I had to make the most out of the opportunity to prove my worth and most importantly to help the team get what it deserved.

SUFC: How do you think the club will fare in the league this season?

MV: It's impossible to tell, and to be honest nobody has ever mentioned anything when it comes to the league table or club and team goals. We have to approach the season as we did the previous one. We need to approach the league one game at a time. We need to focus on the next ninety minutes and train at our best throughout the week to prepare ourselves for the upcoming match. What we need to do is try our utmost to get the maximum out of every ninety minutes according to the outcomes of the game, and at the end of the season, adding up all the minutes played, we will hopefully harvest the fruit of our efforts and see where that will put us in the league table. Nonetheless, I do harbour high hopes for this ambitious team and club.

SUFC: The last few months have been difficult for you, coming back from injury. Tell us about this time and the mental effort you made to make a comeback on the pitch.

MV: At the end of last season I felt a strange pain in my lower abdomen and I honestly thought it was nothing serious to worry about, but the pain kept on persisting. After spending almost three months out of football and in complete rest, I still felt this pain. After various consultation sessions, visiting different specialists and doing a lot of strengthening exercises to create a barrier in front of the inginual hernia, I was told to prepare myself for the scenario of carrying out an operation.

The club’s sports doctor, Dr. Danica Spiteri, disagreed and believed that with the continuation of the strengthening exercises I was doing and frequent observation, the operation could be avoided. Finally, after a total of five months, I started training and playing again, and even though the fear of a relapse of the injury and an operation still lingered at the back of my mind, I felt determined to focus on doing these strengthening exercises and focus on regaining my fitness levels and regaining confidence to play without fear. This was really tough, not only mentally, but also physically and emotionally. I started to feel as though everything was going the wrong way, and the injury wasn’t helping because I was being held back from doing the thing I love most and which gives me most peace.

Being able to play again gave me a huge sigh of relief as through football I have always managed to channel all my emotions into the beautiful game. I feel truly grateful and blessed to be back doing what I love most, and I owe a huge thank you several people: to my parents and family for their constant and limitless support and love; to our medical team for helping me through the process and all the other doctors I consulted with; to the coach (Rodney Bugeja), who kept on inquiring about my condition every single day and continued to believe in me; to my team-mates who kept on encouraging me throughout and motivating me to come back; to my friends and all the Club's supporters; to the Club Committee members who have always believed in me; and to God and my guardian angels who are always by my side in spirit. Hopefully, I made them proud.

SUFC: Thank you for your time, Mirco.