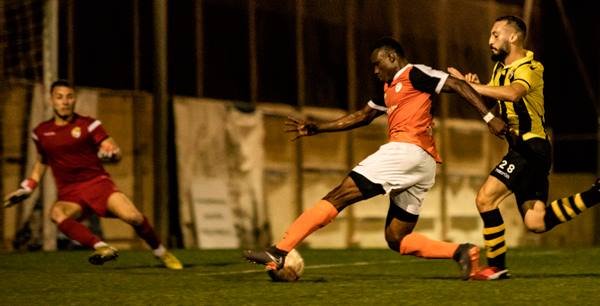 20.09.18 U19: Swieqi United in Seventh Heaven with a comprehensive victory

Although the Orange started brightly, with some slick passing and fast positive transitions which enabled them to create at least two chances in the initial minutes of the match, as the match wore on, Qormi started showing their intent. Indeed, the Young Owls were stunned when from a loose ball, Qormi made their way to the edge of the penalty box and produced a brilliant goal by Luke Farrugia, putting Yellow-Blacks ahead.

The Young Owls were however not deterred, and led by Sammy Elfarsi and Andy Abela from the back, the Orange managed to claw turn the game back in their favour with two goals in quick succession by Ibrahim Salis and Mark Martin. Therefore, Swieqi led 2-1 at the break.

The goal just before half-time bolstered Swieqi, as Gary Bugeja, Luke Gatt and Luke Taliana started winning the midfield battles consistently. Qormi player Gilfred Gatt received his marching orders on 52 minutes when he was judged to have tripped Swieqi’s Mark Martin during a corner melée. From the ensuing corner, the Orange managed to increase the score in their favour, when Ibrahim Salis latched onto a loose ball in the penalty box and fired it past Qormi goalkeeper Dorian Bugeja.

The two-goal deficit proved to be an arduous task to overcome for ten-man Qormi, as the Orange managed to score four more goals in quick succession. Andy Shaw and Nick Galea kept managing their forward forays while Ben Caruana, Ibrahim Salis and Mark Martin were proving to be a constant thorn in the side of the Qormi back four. Caruana finished off a brilliant counter-attack with a low shot after some quick thinking by Salis and Taliana. Salis managed another brace in the 77th and 81st minutes to increase his personal tally to four goals for the evening, while Taliana made it a memorable night with a low shot from a tight angle.

The match therefore ended 7-1 to Swieqi United, with another three points in the bag for the Orange, continuing their positive start to the season.