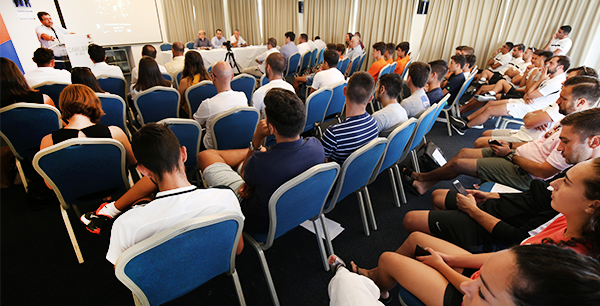 President Dr Justin Fenech, in his introduction, noted that this season would be the club's tenth season, with the Club celebrating its tenth anniversary in April 2019. What for many was merely just a dream back when the club was set up is now a fully-fledged football community. He stressed that it is only through hard work and everyone chipping in their share that the club has made it to where it is today, and that being content with what we currently have would be a very big mistake. History was made, and it would be up to everyone involved in the club to continue in that positive trend so that the Club may continue to be successful in the years to come. Dr Fenech showcased the Club’s continued 'One Team - One Club' philosophy, and how this distinguishes Swieqi United from other clubs in Malta. He outlined the priorities of the Club for the next five years, mainly the financial sustainability of the Club, the Club’s lack of infrastructure, brand outreach, the importance of innovation, and the continual growth of the Swieqi United Community. “Swieqi United’s foundation is its Community, which is built on the idea that everyone has equal ownership of our project; we should not take it for granted, we all need to give something back to our community… if we do that I can guarantee you further success in the five years to come,” said the President in his speech.

Vice-Presidents Dr Michael Calleja and Dr Robert Dingli also took to the floor to talk about the respective sectors that they head up. Dr Calleja spoke about the setup of the Club's competitive squads and how this season, the Club would look to consolidate and build upon that that had been done in previous seasons. The Club has also added new roles to its structure, with the appointments of Billy Mock as Technical Director, Alfred Fenech as Chief Scout, Daniel Mifsud as Head of Team Management, and Dr Danica Bonello Spiteri as Club Doctor. Last but not least, Dr Calleja focused on the Club’s work in establishing a strong Club Philosophy, stating, “In Malta, some people may say that introducing a Club Philosophy is impossible. It is possible because other Clubs abroad have done it. There are no excuses – especially at Swieqi United. If other Clubs abroad have done it so can we.”

Dr Dingli started his speech with the assertion that “part of our success is the fact that the people who built up this Club, the people who had this vision, were people who had no previous experience in Club management; they had no baggage, and they came into the Club with a set of fresh ideas.” He continued by giving a short history of how the Club built itself over the past ten years, highlighting the importance of the Swieqi United brand and putting forward a number of initiatives embarked upon this season, in particular, collaboration with MCAST to give students a forum to develop their media skills, the work on the launching of a new website, the introduction of a Club Administrator, and work on the new Clubhouse, among other projects.

The event concluded with remarks from some distinguished guests. Swieqi mayor Noel Muscat remarked how proud he was of the club and the success story it has been to date. He said that “ten years ago Swieqi was not represented at all; now our flag is flying high and this is thanks to you all.” National Team Assistant Coach Branko Nisevic, also on the concluding panel, also took to the floor and claimed that he was impressed by the Club’s organisation, stating that he was “aware of the shortcomings of football in Malta. Structure is the most important thing. In many clubs there is no structure or vision. Not everyone is pulling the same rope. [Swieqi United is] one of the youngest clubs and you already have a structure and vision. This is your plus.” Taxify Director Matthew Bonello concluded by stating that “[Taxify] are interested in helping the Club grow and we look forward to see Swieqi United at the highest level.”