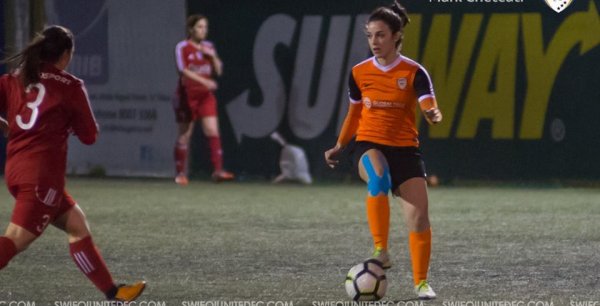 Michael Calleja caught up with Women's Squad player Kate Galea following the conclusion of the team's commitments in both the league and knockout competitions.

MC: It's been a season of mixed results for the girls. What would be your overall assessment of this season's campaign?

KG: We’ve had a challenging season when it comes to opponents as we faced the best teams in Malta. But I think this was an excellent learning experience for us and prepared us for next season. Personally, I always prefer the tougher matches, so the first part of the season was quite enjoyable.

MC: Most of the time, you achieved positive results [even if the the team lost by the narrowest of margins] - is this a sign that the club is nevertheless going places?

KG: I do believe the team has been and will keep on improving. As we all have full-time jobs or are still students, it’s difficult for us to give our full commitment, but I think with our drive, we can go places.

MC: How important was the impetus offered by the coaching staff? They say it's never easy coaching a women's team due to the scarcity of players available on the island...

KG: I think the depth of our squad is quite good, as we always have enough players for games. In this respect, I think the coaching staff sometimes adopted the mentality that less is more. I feel that both Jo (assistant coach Jochen Lenders) and Keith (head coach Keith Gouder) worked in harmony throughout the season, alongside other individuals who always gave their all to the club

MC: Finally, the club is hoping to introduce more girls to football. Given your experience, how do you see this panning out and what added benefits would it give the team in the long run?

KG: Seeing young girls play football is so fulfilling. We can be role models for these girls. The future of the team we started depends on the development of these young girls, so the focus should be put on them, and more importantly, they should be given the same support that the boys get.

MC: Thanks for your time, Kate.