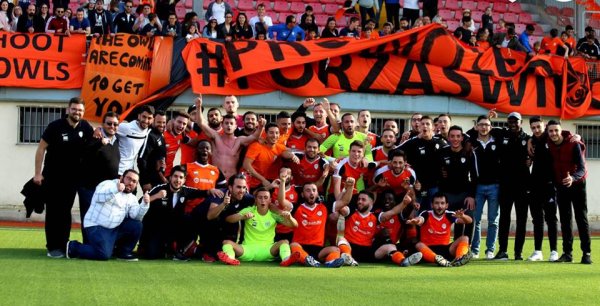 Swieqi United's promotion achivement will certainly go down in Maltese football history as an immeasurable and unbelievable feat. A club that was formed less than ten years ago will be competing in the BOV First Division for the very first time in its history....

It's a story of success that has certainly not gone unnoticed by the media and local football admirers. Speaking during local TV Programme, L-Argument, Ex-MFA Vice President and UEFA Integrity Officer Dr. Chris Bonnett observed that:

'This is the first time that a play-off was won by a team competing in an inferior league. In the Premier League, I am quite certain that this has never happened as the higher ranked team has always managed to consolidate its position in its league.

Well done to Swieqi! They have managed to demonstrate to everyone that it's not about the team but the club. What they set-out to achieve is an ambitious project that started in 2009, [as I believe it's soon their 10 year anniversary], a project which entailed that every team has a set up, is organised, has a coach, assistant coach, physical trainer and someone from the committee there present at each squad and at every level.

I am certainly in awe of them and I pay tribute to Justin Fenech and Michael Calleja and their team of people. They are certainly reaping the benefits of their initial investments. If I'm not mistaken, they also won the Minors league Section C - but winning is not everything to them! They thrive on ensuring that the victories achieved help the club grow itself step by step.

No stranger to local female football, Pierre Brincat also echoed Dr. Bonnett's sentiments, stating that: 'Swieqi is a small village, but I went there once and I was left so impressed by their set up. Even in a women's team, they had a coach, assistant coach, team manager and physical trainer...in a female team!

Whenever they organised friendlies, they used to rent pitches for the girls and looked after them. Now I am happy to note that they will soon be starting recruiting young girls to play the game.

To also note that they have a full time Academy Director who works at the club and they have young people with huge enthusiasm. When they initially set up the club, they didn't just buy young players but built it up slowly and steadily. They are also adopting a similar model in the women's team. I woud love other clubs to copy and observe Swieqi's model'.

Dr. Bonnett concluded by saying: 'Maltese football needs Swieqi. I enjoy talking to them and listening to their ideas - they are so open minded that we should listen to them even if they are at times slightly controverisal!'