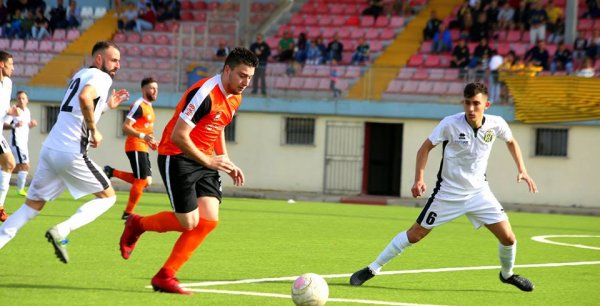 Swieqi United continued to make history in their relatively young existence, as a comprehensive 3-0 win against Zabbar St. Patrick in the promotion/relegation playoff ensured that the Orange shall be playing First Division football next season.

While the Orange were slightly slow out of the blocks and their opponents controlled the game in the initial stages, Zabbar were constantly being caught out by Swieqi's pacy forward line of Sadat Suraka, Gianluca Calabretta and Nicholas Schembri.

Schembri spurned a good chance to open the scoring midway in the first half, when the Zabbar goalkeeper made a hash of controlling the ball, but Schembri's finish just went wide of the post. Nonetheless, he made amends in the 39th minute, after a run down the flank from Suraka set him up for a clinical finish.

Shellshocked, Zabbar mustered a reaction at the beginning of the second half, and tried pressing the Orange rearguard. However, solid defending across the back four repelled all that was thrown at the Owls. Perhaps slightly against the run of play, Swieqi then doubled their lead, as from a corner kick, Suraka rose highest to head the ball goalwards, which was then nodded over the line by Schembri.

Zabbar continued attacking from thereon in, but the Swieqi rearguard continued to stand firm. The former's task was then made all the more difficult after they were reduced to ten men with a few minutes to go. Then, with Zabbar going for broke in additional time, Sean Gatt Baldacchino and Luke Scicluna found themselves with just the opposition goalkeeper to beat - the former dribbled past the goalkeeper just after the half way line and eventually found Scicluna with a crisp pass across goal, who couldn't miss an open net.

Cue celebrations for the Orange at the full time whistle, after running out deserved victors. Swieqi therefore join champions Gudja United and Santa Lucia in the First Division next season, where new challenges await the Owls.

Well done Orange, and congratulations on a superb season!