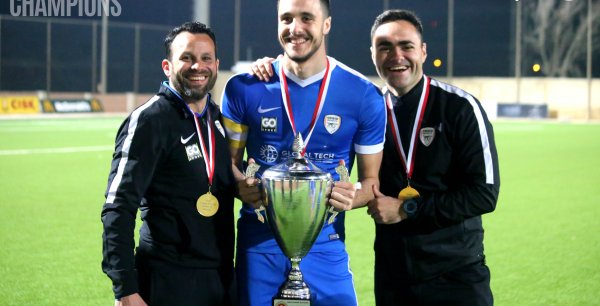 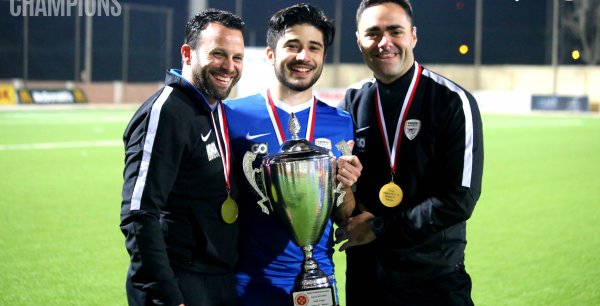 22.04.18 U19: End of season interview with Benji Frendo and Thomas Philip Debono

With another successful Under 19 campaign completed, Swieqi United's Vice President Michael Calleja spoke to team captain Benji Frendo and vice captain Thomas Philip Debono to gather their thoughts and reactions after such a nail-biting season.

MC: It's been a long hard season. What are your feelings at the end of a pulsating league campaign?

BF: I couldn't be happier at the end of the season! This season we really gelled as a team immediately and we all adapted to the way we play individually to work as one team.

TD: Satisfaction! A lot of satisfaction! We worked hard to get to where we got to. Determination was something we never lacked. We remained humble and focused at all times, with our exceptional coaches guiding us along this magnificent journey.

MC: You completed an entire round unbeaten. How much belief did that run give you that you could go all the way?

BF: We believed in ourselves and our game a lot. We knew that we played good football and are capable of taking on any team coming our way with the good training we were given and constant commitment from each and every single player.

TD: To be honest, our unbeaten run was due to our hours of preparation we had during pre-season. We all shared a common goal and knew that it would be a challenging task to accomplish. Yes, our successful run was paved by our first round clean sweep, but this only fuelled our desire to finish what we set our goals to be.

MC: Coaches Rodney Bugeja and Paul Gatt surely deserve immense credit for their efforts. How important was their input throughout the campaign?

BF: Yes, they surely do! Coach Rodney isn't just a great tactical coach to us, but also acts like a father figure. We can face him not only like a coach but also as a father, because especially if we have any personal problems, we know we can talk to him. He always makes sure that the players are happy and tries to keep us mentally positive with regard to whatever obstacles that might come our way. Coach Paul was also great, keeping the sessions intense and making sure we play good football throughout the season. His commitment and love to the players made things easier inside and out.

TD: Coaches Rodney and Paul had a difficult task at the start of the season, when we had a lot of new faces. They managed to make everyone feel right at home immediately - no mean feat as this normally takes time. Both our fantastic coaches showed us constant support and gave us constructive feedback. This helped us tremendously as they never made anyone feel not valued- we were treated as equals. They always wanted to bring the best out of us, and watch us grow into not only footballers but also men. After this fruitful season, I think they can say that they have achieved that success!

MC: Our new foreigners this year were Tejumola Ayorinde and Isah Doma Yusuf. What did they bring to the side?

BF: Both players were a great addition to the team. They surely showed us what's it like to have strength on and off the ball, not to mention their incredible speed. They have showed us their heart on the pitch and also at training! Truly great players with big love for the game.

TD: TJ and Isah both contributed heavily towards our successful season. Both players brought speed and power into our already dynamic squad. More importantly, they gelled with our winning mentality and shared our never-say-die attitude. Congratulations to both these outstanding players - the future is bright for them!

MC: Which games do you look back at with particular fondness or appreciation?

BF: Most definitely, the game against Tarxien, which was a hard fought game against a great team with Premier League players. I also look back at my personal goal which won us the game against Naxxar in the first round. It was certainly a very important strike, which contributed to help us cement first place.

TD: Every game this season has been a memorable one for me. However, there are three matches this season that stand out. The first was our first pre-season friendly against Zabbar, where it was the first time together playing with so many new faces in the squad. I was eager to see how we would cope together as this match would set the tone for the rest of the season, especially after our previous successes in Section D. I was immediately impressed by everyone- the heart and determination to impress and perform by every individual- incredible. To come from 2-0 down and end the game with a draw against a strong Zabbar side suggested to me that we were in for treat this season.

Another match that I fondly remember is that against Tarxien Rainbows in the second round of the league. Trailing 2-1 shortly after the second half commenced, we all knew we needed to win at all costs and we were not intent on giving in. Our will and determination to succeed paid off as not only did we level the score but also took the lead and saw out the match till the end and gained the all important three points. Everyone played an important role that night. The resilience and unity shown by everyone was phenomenal. This win certainly ranks among the best comebacks in our Minors' squad history.

Obviously, I can never forget our last league match, a match which I will always cherish forever. A match in which a win would crown us Section C Champions. The preparation towards this special night was unreal. Never have I seen such a motivated team; this is what every player wants to be part of. As the referee whistled for the last time for our league commitments, we walked out as Champions after an incredible performance from all players and staff involved. Also managing to get my first league goal this season was pleasing, although it also meant that it was my last Minors' goal. I could not have asked for a better night to grab it.

MC: Finally, what are your personal plans and ambitions for next season?

BF: My personal plans are to currently get my knee better and also start rehab as soon as I can start jogging. Whatever comes my way, I will certainly do my best!

TD: I have not thought that far ahead yet, but I now I must make the transition to Seniors football. I think my next objective is to try continue achieving more success with the Seniors' Squad and help Swieqi United grow even more.

MC: Thank you Benji and Thomas for your time, patience and dedication, and well done for a fantastic season!