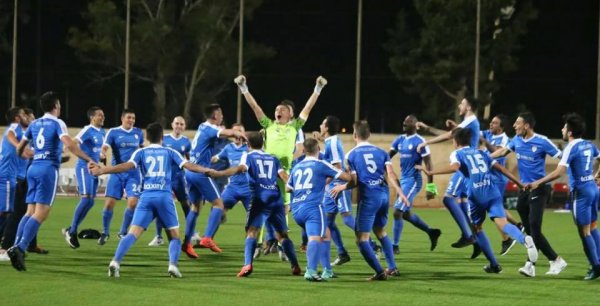 Swieqi United made sure that they didn't let the Section C championship slip out of their grasp last night with a clincal 6-1 victory over Msida St. Joseph, ensuring that they finished the season one point ahead of fellow promoted side Naxxar Lions.

The Owls took the lead early on the in match, with Luke Mamo prodding the ball home following a well worked free kick routine. Continuing to apply incessant pressure on the Msida goal, Swieqi then soon doubled their lead thanks to a Matthew Camilleri strike, following some confusion in the box. The Orange hence went into the break with a comfortable 2-0 advantage.

Right after the restart, Msida pulled a goal back, but Swieqi responded to the setback by growing more confident in their play as the half wore on. Msida then conceded two penalties in relatively quick succession - the second of which led to the sending off of their defender Mattei Cini - which Thomas Philip Debono and Ben Caruana both converted, effectively sealing the result.

With minutes left on the clock, substitute Andrew Shaw scored arguably the pick of the bunch, with a fine curling effort into the top right hand corner of the net; and three minutes later, on the cusp of the full time whistle, Luke Gatt sealed the rout with a low, fine strike from distance that whistled into the bottom left hand corner of the net.

Following the match, captains Benji Frendo and Thomas Philip Debono were presented with the Section C championship trophy by MFA Vice-President Dr Matthew Paris, with the trophy a fine reward for the quality and consistent performances that Rodney Bugeja and Paul Gatt's troops showed throughout the season.

Section B, here we come!