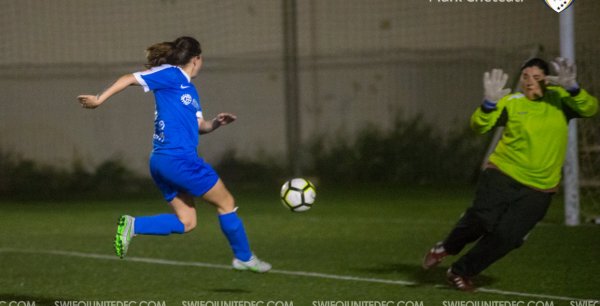 18.04.18 Women: Swieqi make it six in a row to conclude league commitments on a high

On Tuesday evening, Swieqi's Women Squad faced Fgura, in the last league game valid for this season. Despite the slender 2-1 win for the Orange, Swieqi enjoyed most of the possession throughout the game.

The first half was rather entertaining. The women had many attacking opportunities and chances to finish with shots on goal either being saved by the opposition goalkeeper or ending up just inches wide. However, it was Fgura that took the lead in the 17th minute, who forged ahead thanks to an unfortunate Kirsty Paris own goal.

The early setback did not discourage the Owls, who upped the ante and ensured that the momentum swung in their favour. Thanks to some nice through balls from the midfield to winger Aleksandra Georgieva, the Women in Blue managed to turn the result around, with Georgieva beating the opposing goalkeeper twice in the span of ten minutes. The girls therefore took a 2-1 lead into the half time break.

In the second half, the tide turned slightly and although Swieqi still maintained most of the possession, the Reds also tried to challenge. In the 54th minute, Kate Galea’s long shot from a free kick went just wide. In the 70th minute, the Owls could have further extended their lead, as Janice Spiteri came agonisingly close to scoring twice after receiving two through balls from Simone Buttigieg and Galea respectively, only to be foiled by the opposition goalkeeper on both occasions.

Swieqi therefore won the match 2-1, ending their league commitments in 1st place in the relegation pool, winning all six matches.

The girls next face Kirkop United for the Knock-Out Competition Quarter-Finals on Wednesday 2nd May at Mgarr Ground at 8.15pm.