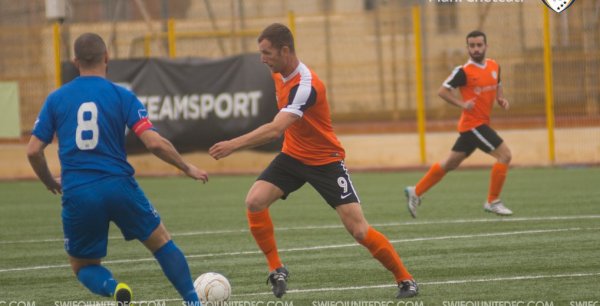 Swieqi United and Gudja United played out a tense draw at the Luxol Stadium, in what was seen as an important fixture for both sides' promotion aspirations.

The Orange started very well and created some good chances to score but were dealt a severe blow when team captain Roderick Taliana had to be taken off injured mid way through the first half.

Simultaneously, Gudja upped their game and hit the crossbar twice during the first 45 minutes. In fairness, Swieqi were slightly lucky to hold onto a draw till the half time whistle, but coach Billy Mock was determined to instill belief into the troops and rally them for the second half.

With the team in better shape and with renewed belief, Swieqi upped their game in the second half and played better football. The best chance for the Orange fell to Nicky Schembri, whose shot just shaded the crossbar. Gudja also threatened through their various set piece actions, but the game ended all square.

The point gained ensures Swieqi shall end the season in the top three at the very least. A great achievement for the club!