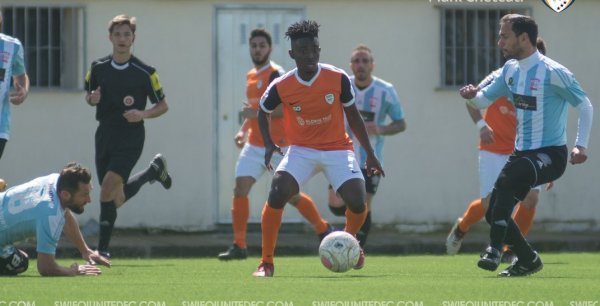 A top-of-the-table clash between two in-form sides certainly lived up to its billing as Swieqi and Fgura both put on a great display of football at the Centenary Stadium.

With both teams knowing that a win was of paramount importance, this game was always going to produce edge of your seat moments, and this confrontation was certainly not short of any controversy.

Fgura opened the scoring when Shaun Bugeja was adjudged to have held back a Fgura player. Gilbert Martin made sure Fgura forged ahead from the spot. Despite the early setback, Swieqi grew in confidence throughout the remainder of the first half, and it was just reward when Roderick Taliana levelled matters with a well taken goal, involving some brilliant build up play from Nicholas Schembri and Sadat Suraka, six minutes from half time.

In the second half, Swieqi came out all guns blazing and the ever industrious Gianluca Calabretta won a penalty, only for Taliana to see his effort saved from the spot. From the resulting counter attack, Fgura took the lead once again, following a lapse of concentration in the Swieqi defence.

Nevertheless, the steadfast and determined Orange continued to press forward and a Schembri wonderstrike sent the Swieqi bench into raptures.

Five minutes from time, Fgura were awarded a penalty and Shaun Bugeja was shown a second yellow card, leading to his sending off. Thankfully, Fgura's striker blasted the penalty high over the cross bar, and with the Orange withstanding a last minute siege, Swieqi had done well to claim a priceless point.